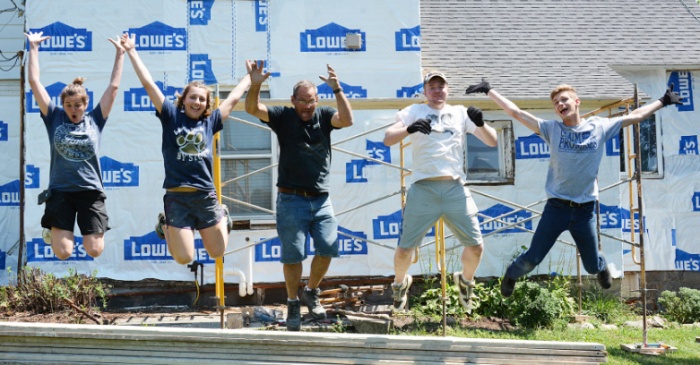 Administrative Director Rob Brinks is astounded at how the organization has grown, some of it self-perpetuated by participants. “We began with a single TASC event with 30 high school students to the current multiple events serving between 120-140 students every year,” he says. “I see some who have gone through the ranks of students being participants in the TASC events to now being sponsors for the events. Not only that, young adults who were involved in TASC now are also assembling groups of their peers to travel to help those who are in need in the US and other places around the world. I like to say that these personally are ‘pinch me’ moments as I wonder if this is all real since we started so small.”

Other “pinch-me” moments for Mr. Brinks are when young adults approach RMS and ask how they can serve in longer-term capacities for more than a week or ten days. “We have had a handful of people from our churches go to serve for two months up to a year in some places,” he says, “serving Reformed ministries all around the world.”

A highlight during 2018 was the first international TASC event. Eighteen people from four URC congregations met at San Diego airport on July 28, 2018, and drove four hours south, deep into Mexico’s Baja Peninsula. For a week, they performed construction work at the Mount of Olives Children’s Village orphanage and conducted a Vacation Bible School, hosted by a Presbyterian church in a nearby town.

A new program beginning in 2019 is called SEED for Serve, Engage, Evangelize, Disciple. This two-week opportunity encourages mature young people (17-25), who have publically professed their faith, to take the call to spread the gospel seriously. The training period incorporates scriptural instruction in methods of evangelism with practical outreach opportunities that depend on the needs of the host church. SEED training events were being scheduled for the summer of 2019 at Trinity URC in Visalia, CA, and the Hope Centre in Toronto, ON.

Domestic projects were planned for Cape Coral, FL, and Cambridge, MD, during 2019. The Florida trip was for multi-generational groups that included families and all ages. Participants with remodeling and trade skills assisted Trinity Reformed Church (URCNA) in Cape Coral from March 29-April 6. The Maryland project was planned for the summer in Cambridge, where a house given to the URC church plant required a new roof, handicap ramp, and interior updates.

Multiple international projects are being planned for 2019 and beyond. Two teams were scheduled during February at the Mount of Olives Children’s Village in Ejido-Uruapan, Mexico. Another team was scheduled for April 11-19 at Lares, Peru, to help install church flooring and distribute audio Bibles in the Quechua language. Opportunities to participate in Christian outreach at English camps in Ukraine, Hungary, Romania, and Croatia ranged from one to nine weeks during the June 1-August 9 time frame. An upcoming opportunity to assist with teaching biblical truths through science camps in Guinea West Africa is being planned for the summer of 2020.

Teams have been working in Cusco, Peru, and the surrounding villages since 2010, when volunteers built a home for MINTS students/coordinators. Mr. Brinks says, “Now, after more than eight years, we see their growth and knowledge of the Reformed faith. Their love for the Bible (as they desire complete audio recordings of the Bible in Quechua, the native language), for others (in diaconal ministries), and the Confessions (they personally have translated the Three Forms of Unity in to Quechua and are working on recording them to distribute to the churches in the remote villages, whose people who do not read) has shown me how consistency in building relationships through RMS work teams has helped the church in the Cusco region grow exponentially. We pray this will happen in other parts of the word where we travel.”

RMS has provided relief after natural disasters and is preparing to do more should the need arise. A small enclosed trailer is stocked with tools for use by RMS teams as well as other relief agencies with which it partners. Because utilities are usually unavailable at disaster sites, RMS hopes to purchase a shower trailer that will allow volunteers and homeowners to clean up after work days. About half the necessary funding has already been secured.

Since Mr. Brinks was hired (part-time in 2011 and full-time in 2013), he has observed growth in individual and federational understanding of mission. “It is fascinating to see new places where Christ’s church is growing through the work of our missionaries,” he says. “It is also a great blessing to see our list of member churches grow from ten in 2009 to 42+ in 2019.”

RMS has received accreditation from the Evangelical Council of Financial Accountability (ECFA) and has worked with others toward the formation of a charitable corporation, United Reformed Mission Association (URMA) to allow Canadian churches to support missionaries and ministries outside their country.

Administrative and promotional efforts generate an increased workload. RMS hired Madison Drew (a member of Trinity URC in Caledonia, MI, and a former TASC participant) as Promotions Coordinator in September of 2018. She is a graduate of Cornerstone University with a Bachelor of Arts in Humanities and a Bachelor of Science in Business Administration. RMS was also in the process of hiring a part-time Administrative Assistant.

A sporting clays event to raise funds for RMS was scheduled for June 8 at Blendon Pines Gun Club in Zeeland, Michigan. Plans are being made for a local fall fundraiser and additional ones in other parts of the country.

For more information about RMS or to apply for service opportunities, check out the RMS website: rms.org.

“We do not know what the future holds for the organization or where it will be going, as I am not sure any of the men who began this ministry would have foreseen where RMS is today,” Mr. Brinks says. “We trust God to lead this organization where He sees fit for us to serve Him.”

The above is a slightly-revised version of an article that appeared on pages 14 & 15 of the March 8, 2019, issue of Christian Renewal.