A worship service, featuring a liturgy rich in responsive readings, marked the organization of Westside Reformed Church in Cincinnati, OH, on a chilly January 25, 2019 evening. The supervising consistory of Zeltenreich Reformed Church (New Holland, PA) called the service with the concurrence of Classis Eastern U.S. of the URCNA, and representatives from far-flung regions of Classis Eastern attended.

Rev. Zachary Wyse, pastor of Westside, welcomed attendees, noting that the church plant organism was now an organized congregation. He briefly related the history of the group, which began as a Bible study and had only about 20 people at its first worship service in 2013. 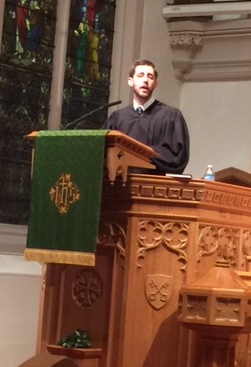 Rev. Wyse opened the worship service, giving additional details about what led to this point and stressing that “what makes this moment rewarding is not because of the fruit of man’s labor, but because it is God’s labor.” Overcome with emotion at one point, he said, “If I seem not quite myself tonight, it’s because the full weight of what is happening is hitting me.”

Dr. Brian Lee, of Christ Reformed Church in Washington, DC, provided the instruction regarding the ordination of elders and deacons. Rev. Wyse supervised the vows and signing of the Form of Subscription. Cornelius Smal, Donn Rubingh, and Ryan Lemmel were installed as elders. Mark Grubbs, Troy Ellens, and Ray Brinker were installed as deacons.

In Peter’s Pentecost sermon, he proclaims words of warning, pleading, teaching, and fellowship. That word was received by those who were not hearers only, but devoted themselves to the word through preparation, prayer, and a process that included devotion and faith. The word is seen through the visible signs of the sacraments, which the text calls to mind by the breaking of break and fellowship of the believers. Rev. Godfrey concluded, “When we gather for an extraordinary event as you celebrate the organization of your church, what better way to do it than in the ordinary way of the proclamation of the word?”

Westside Reformed Church currently consists of over 50 members, and its giving has exceeded its budget in recent months. All 16 members of the original core group still belong to the church. One of the deacons, Troy Ellens, first heard about the church plant when interviewing for a job in Cincinnati in 2013. He was concerned about finding a church home, but his parents from Redeemer URC in Lacombe, AB, had just read a Christian Renewal article about the church planting effort and shared that information with him. He took the job and became active in the church.

Two families who attended the organization service drove an hour and a half from Indianapolis, IN, where Westside has been holding exploratory Bible studies since September of 2018. Three families seem committed and others have expressed interest. Rev. Wyse says, “With three elders and three deacons—and recent experience being a church plant—Westside Reformed Church would love to be used of the Lord in planting more URC congregations.”

One thing that excites Rev. Wyse about the Westside congregation is its mix of people from Reformed and other backgrounds. “Some of us have Dutch blood. But the majority of us have come to the Dutch Reformed tradition through avenues other than birth,” he says. “Although we are a ‘mixed multitude,’ since our inception, we’ve never shied away from historic Dutch Reformed practices, but have embraced them with gusto (e.g., the Three Forms, the Trinity Psalter Hymnal, catechism preaching, the liturgical forms). I mention this because I think that many assume that a URC plant needs to be hip/trendy/‘relevant’ to survive outside ‘Dutch country.’ While a plant may ‘look’ different than a church that’s historically Dutch, traditional practices don’t need to be abandoned. They’re too precious.”

The above article by Glenda Mathes appeared on pages 6 & 7 of the March 8, 2019, issue of Christian Renewal.