After more than four months of waiting for the Italian government to grant a religious visa, things suddenly fell into place with a whirlwind of activity for Rev. Michael Brown and his family.

Rev. Brown was installed to his position as missionary on November 18, 2018. He, his wife Janie, and their youngest son Iain left on November 20 and arrived in Milan on November 21. The Browns joined the Milan congregation for worship on November 25, where they were welcomed with delicious food and warm fellowship. On December 2, Rev. Brown began preaching at Chiesa Riformata Filadelfia, the congregation formerly served by Rev. Andrea Ferrari, who now ministers at Chiesa Protestante Riformata in Perugia.

Rev. Brown’s installation service took place at Escondido United Reformed Church in California, whose consistory called him to serve as its missionary in Milan. Rev. Stephen Donovan, Pastor of Congregational Life, led the service and used the Form for Installation of Foreign Missionaries from the URC’s new book of liturgical forms. Rev. Brown then preached on “The Spirit of Missions” from 2 Timothy 1:7.

Escondido URC is the same church that called Rev. Brown to plant Christ URC in Santee, CA, in 2004. Rev. Brown expressed “great joy” at receiving this second call from the church and explained the twofold rationale behind it.

“Christ URC in Santee already oversees two missionaries: Rev. Andrea Ferrari in Perugia, Italy, and Rev. Mihai Corcea in Romania. This is obviously a large responsibility for one church, especially one that is going through its very first pastoral search after the departure of the planting pastor,” Rev. Brown said. He noted that the URCNA Missions Committee had expressed similar concerns, and Escondido URC responded favorably to Christ URC’s request for assistance.

A second factor dealt with the complexity of having a former pastor as a missionary. “Many, including myself,” he said, “thought it would serve Christ URC better if her former pastor (especially her first and planting pastor) was not her missionary. We think it is better for Christ URC to develop a strong relationship with her second pastor now that the Lord has called her first pastor to labor elsewhere.”

Rev. Donovan said, “Just as the Lord used Escondido URC to ordain Rev. Brown in 2004 to serve as minister of the Word in Santee, He was pleased to use us again in sending Rev. Brown to Milan. A humbling delight!”

Escondido’s Preaching Pastor, Rev. Christopher Gordon, said, “Mike Brown has been uniquely prepared for this calling for many years. He has worked hard to understand the culture, learn the language, and has a heart to shepherd the sheep in Milan and see the great light of the gospel shine in Italy.” 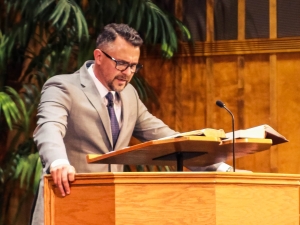 Rev. Brown preached from Luke 1:26-38 on December 2, the first Sunday of Advent. In a report on reformationitaly.org, he noted the timeliness of the text as December 8 is Immacolata Concezione, a national holiday that commemorates the Immaculate Conception doctrine of Mary as sinless.

“I explained how the Bible teaches that Mary was a recipient of grace, not a giver of grace,” he said. “Mary indeed is the most blessed among women on earth, for she was chosen by God to be the mother of the Christ. But, like us, she was a sinner in need of a Savior.”

The Browns believe they have located an appropriate school for Iain, but at the time of this writing were staying in a small one-bedroom apartment during a search for adequate housing that has proved more difficult than anticipated. They trust God will provide a home, but ask for prayers about this and “many bureaucratic challenges” they face in obtaining residency status.

Support checks may be designated for mission work in Milan, made out to Escondido URC, and sent to the church at 1864 N. Broadway in Escondido, CA 92026.

The above article by Glenda Mathes appeared on pages 6 & 7 of the January 4, 2019, issue of Christian Renewal.