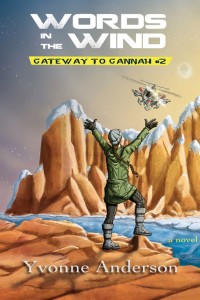 Most people who’ve read Christian speculative fiction view it as poorly written, often romance masquerading as sci-fi with an awkward conversion scene thrown in. Obviously, they haven’t read Yvonne Anderson’s “Gateway to Gannah” series. Even readers who don’t particularly care for sci-fi or speculative fiction will enjoy these well-written and inventive stories about life (and death!) on the planet Gannah.

Having just finished reading Words in the Wind, the recently released second in the series, I am impressed again with Yvonne’s creativity and storytelling skills. The narrative immediately pulls the reader in and through the exciting adventures of realistic and interesting characters.

Yvonne accurately displays Dassa’s mental deterioration during her prolonged struggle for survival in a mysterious gully on the far side on the planet. She also admirably depicts Pik’s mental quandaries as he attempts to lead Gannah in Dassa’s absence. Meanwhile their children try in charactertic ways to cope with traumatic telepathic separation from their mother.

While the plot propels the reader forward as quickly as a Gannahan toppeller, frequent literary gems and credible Christian allusions cause the reader to pause in admiration. Yvonne not only tells a captivating story, but she also incorporates Christian truths in a believable, and even delightful, way. This is Christian fiction at its best.

Last year I purchased copies of The Story in the Stars for all our adult children, and topping this year’s Christmas gift list will be Words in the Wind.

Yvonne blogs over at Y’s Words. Words in the Wind is available at Amazon, Barnes & Noble, Risen Books, and other online outlets.

2 thoughts on “Whose Words whisper in the Wind?”