Delegates debated outdoors whether the large birds shrieking in nearby trees today were hawks or eagles. I vote for hawks, but they looked a lot larger than the red-tailed variety common in the Midwest. One appeared to be a parent and two looked like juveniles. The URCNA has churches in Canada and the United States and has established a Joint Venture Agreement (JVA) to try to coordinate financial matters. Although it was originally hoped that the JVA would help Canadian churches contribute to American causes, that has not proven to be the case. Increasing restrictions on the transfer of funds outside of Canada has resulted in the unhappy situation of the JVA holding some funds intended for American charities without being able to forward them to those specific causes.

Canadian treasurer Pam Hessels was on hand at Synod and was granted the privilege of the floor in order to help explain the problem. 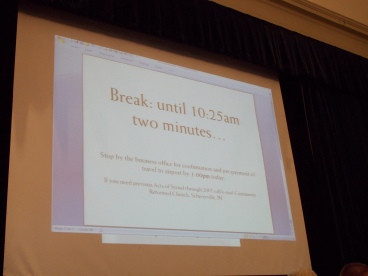 “What is the role of the corporation?” she asked. “Do you want to lose control of 51% of your ministry?” She explained the requirements basically mean that a Canadian organization has control. While the JVA will continue to pay for federational expenses, such as Stated Clerk remuneration, it will no longer collect monies for non-Canadian charitable causes.

Rev. Neal Hegeman described the “sister-church” oversight of his work and encouraged missionaries and church planters to consider similar arrangements.

Synod thanked Rev. Richard Stienstra for his years of service on the Canadian Board of Directors and gave him a hearty round of applause.

Synod approved appointments of board members and treasurers

Recommendations regarding the job description for the US Treasurer had been recommitted to the advisory committee earlier in the day and will be addressed tomorrow.

Other important issues were discussed and voted on today, which I hope to report later. Michael Kearney also helped me get some of my synod pictures online at flicker: http://www.flickr.com/groups/urcnasynod2012/ You may need a Yahoo account to view them.

One last thing: Somehow or other when I left my seat for a break, a draft into which I had merely pasted some notes was published. I apologize for the mistake and ask that anyone who received the rough notes delete them. Thanks for your consideration, Glenda Mathes