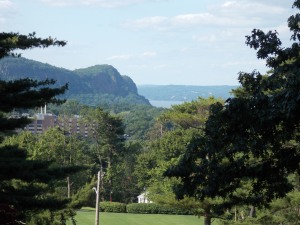 The sun came out this afternoon, and I tried to get some pictures of the Nyack College campus while walking between the dining hall and the auditorium. I’ll paste a few in this post. 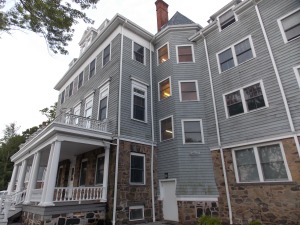 That motion was tabled until after dealing with CERCU matters regarding the relationship with the Canadian Reformed Churches.

The advisory recommendations did not differ substantially from CERCU’s recommendations and delegates quickly passed most of those, until they reached the recommendation for entering into Phase 2 fellowship with the RPCNA, which is the Reformed Presbyterian Church of North America, often referred to as “Covenanters.” These brothers and sisters believe in a cappella singing of exclusively psalms.

But it wasn’t the difference in music preference that proved to be a stumbling block for many delegates. For over 100 years, the RPCNA has permitted women to serve as deacons, primarily in works of mercy to women and children. Since this is a Presbyterian denomination, their elders comprise a session rather than a consistory. Their elders and deacons do not meet together in a council, so the deacons have no ruling authority. The practice of permitting women deaconesses is rooted in the longtime RPCNA interpretation of Scripture regarding women’s gifts and is not related to the modern feminism movement.

Debate was lengthy and reminiscent of the same discussion in 2010. The voice vote on the recommendation to enter into Phase 2 with the RPCNA was too close to call and a show of hands proved inconclusive, but a ballot vote proved that the motion carried.

Synod then passed a motion encouraging each classis and consistory to continue to engage the issue of an eventual merger with the Canadian Reformed Churches by seeking opportunities to promote unity and fellowship.

Having dealt with the CERCU recommendations, Synod returned to the matter of the PJCO committee’s members and mandate. Rev. Adrian Dieleman was approved to replace Dr. Nelson Kloosterman on the committee, but delegates once again became bogged down on a specific mandate. Finally a motion to recommit the matter to committee carried.

As plenary session drew near its scheduled recess to allow two committees to finalize their work, delegates passed three recommendations regarding the songbook issues addressed in Overtures #8 and #9.

The advisory committee had drastically edited down the objections contained in Overture #8, and one recommendation asked Synod to direct the songbook committee to “consider ways there may be the least amount of unrest and concern preceding and subsequent to the implementation” of a new songbook with regard to three matters: gender neutral language, Jehovah, arbitrary or unnecessary word changes. Synod declared that this was its answer to Overture #8, and that this action as well as the previous decision to cooperate with the OPC in the production of a songbook was its answer to Overture #9.

The above report was written by Glenda Mathes, contributing writer for Christian Renewal.