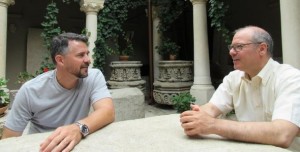 We want the gospel to be proclaimed to all nations, we pray for our missionaries, and we write out generous checks for mission endeavors. But how many of us would be willing to give up our comfortable homes and familiar communities to live and work in a foreign country among people who speak a different language?

The decision to serve as missionaries for Reformation Italy, beginning in June of 2018, was extremely difficult for Pastor Mike Brown and his wife, Janie. God’s will became increasingly clear through many circumstances and people over the last two years, but what finalized their conviction were unanticipated questions posed this past summer by their 11-year-old son, Iain.

In Pastor Brown’s letter to the Christ URC congregation he currently serves in Santee, CA, he related his conversation with Iain while they visited Italy’s far south.

That may have been a turning point for Pastor Brown, but Rev. Andrea Ferrari had hoped his friend would join him in the work of Reformation Italy ever since Rev. Brown had assisted him during the summer of 2015. When the Browns returned for the summer months of 2017, Rev. Brown filled the pulpit in Milan, while Rev. Ferrari pastored a small group in Perugia. This period of ministry convinced both men that Rev. Ferrari was a good fit for the work in Perugia and Rev. Brown could serve well in Milan.

Having both arrived at the same conviction, they worked up a proposal suggesting this division of labor as Reformation Italy goes forward toward its goal of establishing a Reformed federation in Italy. The Christ URC consistory discussed the proposal and then sought counsel at the September meeting of Classis Southwest US.

“The delegates were very supportive of the proposal,” Rev. Brown said. “They have been familiar with CURC’s mission to Italy since 2009.”

The elders at Christ URC also sought the advice of the URCNA Missions Committee. Missions Coordinator Rev. Richard Bout and Rev. Paul Murphy traveled to Italy and recommended the plan to Christ URC’s consistory. The Milan and Perugia groups each voted unanimously in favor of the proposed pastors serving them.

Christ URC’s elders additionally conversed at length with the elders in Milan, a new elder in Perugia, and Pastor Ivan Forte in Turin. Revs. Ferarri and Brown had worked with Pastor Forte during the summer, helping prepare him for a ministerial examination.

Because Rev. Brown has traveled to Italy several times since 2009 and has studied Italian intensely in recent years, he is proficient enough to preach without a translator.

Christ URC’s council voted unanimously for the proposal at its October meeting. Churches within Classis Southwest US have expressed support, and the plan is scheduled for implementation in June of 2018.

Rev. Ferrari explained that Rev. Brown can immediately and effectively serve people who already know him within the established and organized church in Milan, a multicultural city similar to San Diego. “When Rev. Brown arrives, he will be able to concentrate at once and without any distraction on his pastoral responsibilities and refining his knowledge of the language/culture.” He added, “On the other hand, I have been visiting Perugia regularly in the last three years, knowing the people and the place so that it is much easier for me to labor there as a church planting pastor.”

Perugia is a university city and has a population of about 175,000 people, with a culture is very different from Milan, according to Ferrari.

“Because of the load of work and need for wisdom from more people,” Rev. Ferrari said, “we think that more than one consistory in the US should be involved in the work in Italy and also that the Missions Committee itself should determine a plan to be more present on the field to assist and encourage Rev. Brown and myself, helping us to form a class of mature elders and deacons in the churches.” Ordaining office-bearers in Turin and Perugia will permit the churches to begin holding Classis meetings, the first step toward organizing Chiese Riformate in Italia (CRI, Reformed Churches in Italy).

The Browns plan to sell their house and apply for a religious visa through the Italian consulate. Iain is preparing for the move by going to a private tutor and doing daily homework in Italian. The family hopes to commit to the mission for at least five years. Rev. Brown anticipates raising financial support from URCNA churches and private donors.

“Janie and I are confident that just as the Lord supplied our family’s needs while I was in seminary, he will provide for our family again,” he said.

Pastor Brown graduated from Westminster Seminary California in 2004, but began teaching a Bible study in Santee a year earlier under the oversight of the Escondido URC consistory. The congregation became an organized church in September of 2006 and Rev. Brown was installed in January of 2007. He and Janie love their church and have rejoiced to see God’s amazing work in it.

“He has established CURC as a congregation that has remained hungry for the gospel and willing to love one another,” Pastor Brown said. “He has marked this church with peace rather than controversy, and service rather than selfishness. On top of that, God has used CURC to produce several pastors and missionaries that are now serving the church in different parts of the world. He has done far more abundantly than we ever thought or imagined.”

The church has been involved with mission work in Italy since early in its organization, when they began supporting a ministry that published Reformed literature. Christ URC member, Simonetta Carr, translated projects for the editor, Rev. Andrea Ferrari, who pastored a Reformed Baptist church.

As Rev. Ferrari became more familiar with the Reformed faith, he and his congregation sought affiliation with more confessionally Reformed churches. Rev. Ferrari sustained a colloquium doctum in Classis Southwest US, and Christ URC ordained him as a missionary pastor to establish a Reformed federation of churches in Italy. He subsequently has preached primarily in Milan’s Chiesa Evangelica Filadelfia, but Reformed believers from other areas have been in contact with him after discovering the Milan church’s website.

The group in Perugia, about four hours south of Milan, has prayed for a pastor for years. For the last two years, they have gathered in front of a computer to worship with the church in Milan via Skype. About every eight weeks, Rev. Ferrari administers the Lord’s Supper and provides pastoral care. The congregation loves Rev. Ferrari and his wife, Christina, and looks forward to their arrival in June.

Another group in Turin, about 80 miles west of Milan, is led by Rev. Forte. Pastor Ferrari travels to Turin monthly to instruct church members in the Three Forms of Unity and the URCNA Church Order.

Rev. Ferrari explained that there is contact with a handful of Reformed believers in a part of the Italian “heel” with few Protestant and evangelical churches. The hope is for God to raise up Reformed pastors to minister to these groups and eventually form a federation.

Two Italian brothers are attending seminaries in the US. Vincenzo Coluccia, a member of the Turin church, left a position as an engineer and is in his second year at Westminster Seminary California. Ottavio Palombaro, from Perugia, is a student at Puritan Reformed Theological Seminary in Grand Rapids and attends Cornerstone URC in Hudsonville, MI.

Rev. Brown originally resisted the idea of becoming a full-time missionary and was reluctant to leave his home and church. “Janie and I were willing to go wherever God called us, but we quietly hoped that he would send someone else.”

He thought his 2017 trip to Italy might be his last. “This arrangement did not seem sustainable for CURC or for me personally. We agreed to go to Milan for three months because we believed it was necessary for the starving group in Perugia.” But then God used Iain’s words to convince him otherwise.

For more information on the work in Italy, see Reformation Italy’s updated website at www.reformationitaly.org.

The above article by Glenda Mathes appeared on pages 8 & 9 of the January 19, 2018, issue of Christian Renewal.