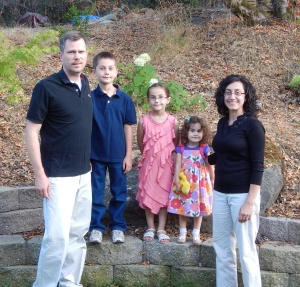 People often say that God doesn’t close a door without opening another, and we frequently see it happen. More rarely the newly-opened door requires stepping over the threshold into a different country. But that huge step of faith for the David and Rashel Robbins family is actually the fulfillment of their lifelong dreams.

Even as children, each of them had longed to serve God in foreign missions, a shared desire that drew them together when they met. God seemed to close that door, instead calling the couple to Huntington, WV, where David planted Trinity Presbyterian Church for the OPC. But late in 2014, the supervising session questioned the viability of the mission work. The elders encouraged David to seek another call before it became necessary to close the effort. While that door was easing shut, no others appeared to open.

“We still had a longing to share Christ with the world,” David says, “but began to wonder if this was not God’s plan for us. We recommitted our desires to the Lord, and then—in a moment completely unforeseen and unanticipated by us—we were asked whether we would be interested in serving the Lord in Uganda.”

That foreign missions possibility came to light at the March 2015 presbytery meeting. David and Rashel visited the Karamoja field in August and were interviewed by the OPC’s Foreign Missions Committee in September. The Committee issued a call to him, which was processed by his presbytery, and he was installed as a missionary to Uganda on October 30. The door to his pastoral work at Trinity Presbyterian Church closed at the end of October.

David says, “Our prayerful ‘yes’ has consistently met with the Lord’s confirmation, and now we eagerly look forward to getting to the field.”

The family, which includes three young children, anticipates arriving in Uganda in February of 2016. They will live in a house located in one of three adjoining missionary compounds, which currently house around 20 people. Rashel’s younger sister, who has lived with them for several years, will remain in the States to attend college.

Karamoja is the eastern region of Uganda, about 2-7 hours (depending on travel conditions) from Mbale, where Eric and Diana Tuininga serve, and 7-13 hours from the capital city of Kampala and nearby Entebbe on the shores of Lake Victoria.

The area is considered high risk, due to cattle raids. Although that criminal activity has decreased in recent years, petty theft and violence (leading to martial law) are common. Residents must be take precautions against natural threats like malaria, scorpions, and poisonous snakes.

The Orthodox Presbyterian Uganda Mission (OPUM) has been working in the Karamoja area for 15 years, establishing an indigenous church and performing works of mercy. Other OPUM efforts include literature production, literacy training, medical care and health instruction at a clinic, vocational training, well drilling, and a working farm.

In January, the Robbins family will undergo a month of instruction at Mission Training International in Colorado. Then they will fly to Entebbe prior to making the long drive to the northeast.

Rev. Robbins, a 2005 graduate of Mid-America Reformed Seminary, plans to assist Pastor Dave Okken with planting a church in Nakaale. His work will include caring for the mission, reaching out to the community, and discipling future church leaders.

The family appreciates prayer as they walk in faith through this open door.

“We’re thrilled that the Lord has seen fit to give us this long-held desire of our hearts, and pray that he will enable us to serve him for his glory,” Rev. Robbins says. “That Christ would claim the people of this very dark place for his own is our great desire. Though we understand that this will not be an easy calling, if he is glorified, we will rejoice.”

The above article by Glenda Mathes appeared in the February 3, 2016, issue of Christian Renewal. For updates on the work, see the family’s blog myganda.