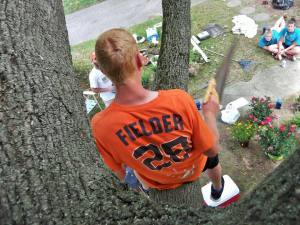 It was a busy year for Reformed Mission Services (RMS). Volunteers participated in activities ranging from the biggest ever TASC group, to a first VBS event, to new TASC sites, and a house construction trip.

The summer began on June 21-28, 2014, with the largest TASC in the history of RMS, when Trinity URC in Caledonia, MI, hosted 55 students and sponsors. According to RMS Director Rob Brinks, calculations for that number of participants over four work days equals one year (52 weeks) of labor for one person at 40 hours per week.

“Such a large event carried with it many challenges,” Brinks said. “The first was finding enough work for such a large crew, and another was fostering fellowship among so many individuals. Despite these challenges, it was a success due to the organization of the host church team and the spirit of the group.”

Volunteers cleaned and repaired a barn, fencing, and tack at HUGS Ranch, which matches needy youth with rescued horses. They also erected a shed and painted at New City Fellowship, the OPC church plant in Grand Rapids. Other tasks included installing fencing, weeding, and sealing a driveway. Crews assisted Love, INC (In the Name of Christ) and the Alpha Women’s Center with sorting, cleaning, organizing, painting, and landscaping.

This summer RMS launched a new program of pairing an established church with a church plant to provide resources needed for a VBS outreach.

“The idea is for a larger established church to provide most aspects of a VBS program (lessons, crafts, skits, promotional items). Members of this church work with volunteers from the smaller church to hold a local outreach event,” Brinks said. “This not only strengthens the churches by working together, but it also gives the smaller church the opportunity to reach out with the gospel to its surrounding community. This additionally creates awareness of that body of believers and its worship services.”

Faith URC of West Olive, MI, came alongside Sioux Falls URC in Sioux Falls, SD, for a VBS project from July 18-26. Rev. Spencer Aalsburg of Sioux Falls URC said, “It is like VBS in a box. You open it up and find everything you need—the volunteers and the complete VBS program.”

RMS hopes for more participation in this new program during 2015.

The TASC program continued its successful history with a repeat performance in West Sayville URC (a previous host in 2012) from July 26-August 2. Construction projects ranged from installing closet shelving to building planting tables to roofing and renovating homes. TASC volunteers painted, power washed decks, and cleaned a garage. They washed walls and windows, pulled weeds, and trimmed bushes at a Christian school. They also served Christ through their work at a youth mentoring facility.

Two TASC sites were the first hosted by their respective churches: Covenant Reformed Church in Pella, IA, and First URC in Chino, CA.

From July 26-August 2, thirty volunteers stayed in Covenant church and worked at six south central Iowa locations, including a Christian school, a Christian camp, and a home for young women who have been incarcerated. Their work ranged from moving rock and digging a trench to wiring and plumbing. They built a porch, installed windows, and stained a shed. They weeded, cleaned, and painted. Then they painted some more.

Organizer Sara Runner said, “Although our youth weren’t too excited about staying home for TASC instead of going somewhere new, with a little encouragement, they all agreed to participate. After the event, they all admitted that it was so great to see how God can use them in their own communities. It was also encouraging for those of us  who planned the event to watch the church surround us in prayer and support prior to and during the week.”

Although it was the church’s first effort, seasoned TASC participants called it their “best TASC yet.”

The Chino TASC from August 2-9 was smaller than most groups with only 24 students and sponsors, but that contributed to closer fellowship and increased camaraderie.

Like other groups, these TASCers did lots of cleaning, landscaping and painting at several locations. Unlike most other groups, however, these volunteers spent a big day preparing and serving meals to homeless men, women, and children in Los Angeles. They even walked the streets and interacted with homeless people in what they called “an eye-opening experience.”

“The unique aspect of this event was going down to Skid Row in LA, and serving at the Union Rescue Mission,” Brinks said. “I think all the participants will remember that day for the rest of their lives. I know I will.”

During 2015, RMS hopes to have five TASC sites, many new. “It is our prayer that we will also have new participants in this program so that many lives will be touched and the Kingdom of God will grow both numerically and spiritually,” Brinks said. “To Him be the glory and honor.” 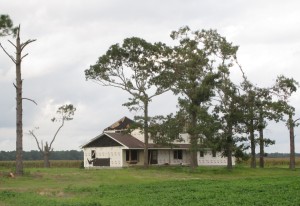 In addition to the TASC service trips for teens, RMS also organizes service trips for adults. From August 16-23, a group of volunteers worked in North Carolina, rebuilding the home of the Mark & Carla Van Essendelft family.

“The one thing that I took from this trip was the attitude of the Van Essendeflts,” Brinks said. “They basically lost all their possessions in a tornado, however, everyone’s life was spared through God’s providence. They are in awe about the love, prayers, and support that they have received from all over the world (even from the brothers and sisters in Uganda where Carla’s brother, Eric, serves as a missionary).”

Eleven volunteers from Vermont, Indiana, Michigan, and New York stayed with families of Covenant URC in Pantego, NC (pastored by Rev. Cal Tuininga, father of Carla Van Essendeflt). According to Brinks, this housing arrangement allowed volunteers to “see the hospitality of Christ overflow,” in addition to experiencing fellowship with each other.

The fellowship of believers was additionally evidenced in a gift of over $11,000 from OPC brothers and sisters to assist in the rebuilding of the Van Essendelft home. The family hoped to return to their home in time for Christmas.

A further aspect of RMS is its foreign focus. A team was being assembled to travel once again to the Mount of Olives Children’s Village (orphanage) in the Baja California region of Mexico from January 17-24, 2015. More details are available on the RMS website.

RMS has been sending volunteer teams to Peru since 2010 and another trip is being planned for May of 2015. Previous trips have been to Cuzco, but this team will travel to Lares, to assist a small church planted by the Cuzco congregation. The group has outgrown its meeting place in a small room of a home, so the RMS team will assist in constructing a building for worship and outreach to the surrounding villages.

Rob says, “We pray that God will provide 8-10 men to travel there and that the necessary funds will be donated to complete this project.”

RMS is developing a couple of evangelism programs involving persons from high school age to adults.

Mr. Brinks notes that Canadian churches have had difficulty contributing to US organizations like RMS, but that Trinity URC in Lethbridge, AB, is working toward setting up a non-profit charitable corporation in line with the Canadian Revenue Agency regulations. RMS has already made provisions for one Canadian church to become a member of Reformed Mission Services. For more information, contact Rob Brinks at rob@rms.org or Rev. Hank Van der Woerd, pastor at Trinity URC of Lethbridge, AB.

The above is a slightly edited version of an article that appeared on pages 12 & 13 of the December 17, 2015, issue of Christian Renewal.