Reformation celebrations are rather rare in New Zealand. Yet churches belonging to the Reformed Churches of New Zealand (RCNZ) hosted some significant Reformation-related events in 2012.

Rev. Leo de Vos says about a meeting held on Reformation Day in the Reformed Church of Silverstream, “Some of our churches are not inclined to have services on special days while others are not used to holding any service to recognize the Reformation, so this was rather new.”

The Silverstream meeting was one of several stops on a New Zealand tour by Mid-America Reformed Seminary president, Dr. Cornel Venema, who traveled with his wife, Nancy, and others from the Mid-America community between October 23 and November 10. In addition to the Silverstream Reformation event, which was held in the Wellington area, Dr. Venema spoke at two conferences and preached on two Sundays at locations on both the North and South Islands.

“We were very thankful for the number who came,” says Rev. Peter Moelker. “We had pastors and members attending from the Reformed Churches (RCNZ), but just as many from outside the RCNZ, including Presbyterian and Reformed Baptist.”The Reformed Church of Avondale hosted the Auckland Reformation Conference 2012 on October 26-27. Between 100 to 120 people attended the conference on “The Supremacy and Finality of Jesus Christ.”

Dr. Venema spoke in three lectures on the supremacy and finality of the word of Christ, the atoning sacrifice of Christ, and worship through Christ. 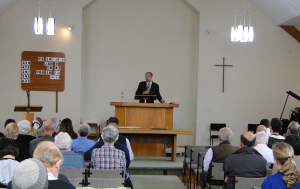 “In that the Reformed churches of any stripe in New Zealand are all relatively small, it was a great opportunity for mutual encouragement in our desire to be faithful witnesses of the Lord in this increasingly pagan city,” says Rev. Moelker. “We had been praying that the Lord would prepare the way and that the Word spoken would be particularly helpful and challenging to us in our context. The Lord certainly answered that prayer.”

While in the Auckland City area, Dr. Venema also spoke informally at a breakfast meeting of pastors and office-bearers about recent theological discussion regarding the Two Kingdoms/Natural Law view.

At the Silverstream event on October 31, Dr. Venema focused on the finished work of Christ our mediator, based on Hebrews 10:19-25. He pointed out that worship should be a great privilege since Christ has opened the way and we no longer must worship through priests or sacrificial ritual.

“Approximately 150 people attended and sang beautifully,” says Rev. de Vos. “We do sing the roofs off of our churches in New Zealand! I believe that many people appreciated recognizing Reformation Day and the wonderful gospel message preached.”

The Reformed Church of Dovedale hosted the second conference, which was held at St. Christopher’s Anglican Church in Avonhead (Christchurch) on November 2-3.

“We deliberately held the conference at this church hoping to attract some of our local evangelical Anglican brethren, but sadly (for scheduling reasons as much as anything else) none came,” explains Rev. Andre Holtslag. Still, about 60 people attended each of the three lectures on “Contemporary Challenges/Opportunities Facing the Evangelical and Reformed Churches.” Under that theme, Dr. Venema addressed challenges to preaching as the principal means of grace, challenges to the churches in evangelism, and challenges to the Reformed understanding of Christ’s Kingship (the Two Kingdoms/Natural Law debate).

“The response has been quite favourable with folk benefitting from timely reminders about these important truths,” shares Rev. Holtslag. “We are hoping to make this conference an annual or bi-annual event as the Reformed faith needs wide exposure. I believe the addresses on preaching and evangelism were very helpful as we too can so easily get sidetracked by this new idea or that fresh approach.”

Dr. Venema, who spent several childhood years in New Zealand while his father, Dr. Richard Venema, served congregations there, had meaningful visits with many old friends and acquaintances. He was most moved, however, by the vitality of the churches.

“The New Zealand churches are few in number, and relatively small in size, but I was encouraged by the wonderful singing of the congregations (would put us to shame, I think), the simplicity of the lifestyle of the people, and even the openness of the young people of the congregations,” he says. “My father wanted so much to go along with us, but his age and health wouldn’t permit it. He would have been ‘pleased as punch,’ to use one of his favorite expressions, to see the vitality of the churches. I don’t mean to paint too rosy a picture, but I was personally moved by the visible evidence of the Lord’s faithfulness from generation to generation in building and preserving his church among the Reformed Churches in New Zealand.”

The above article by Glenda Mathes appeared on pages 10-11 of the January 16, 2013, issue of Christian Renewal.