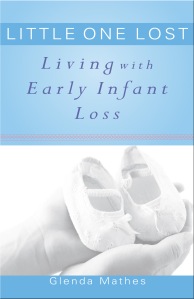 While doing some marketing research this morning, I discovered a few new online references to my recently published Little One Lost: Living with Early Infant Loss.

First, I found a positive review of Little One Lost: Living with Early Infant Loss at the Reformed Reader blog. Andrew Compton (URCNA minister) writes that he attended Synod Nyack 2012 where he purchased Little One Lost. He calls it “a very timely and powerful book” and adds, “I was deeply moved.”

He notes that every death is a tragic reminder of the curse, but that the death of a child “brings a unique set of emotions.  Ministers and lay-people alike are often poorly equipped to empathize with grieving mothers and fathers.  This is why Little One Lost is such a valuable new contribution.”

Compton adds, “I believe that this book will benefit all of us.  It will help those of us who are ministers to preach the gospel in more intentional and sensitive ways to those carrying these sorrows.  It will help friends and family to lovingly bear the burdens of those who have suffered early infant loss.  Perhaps most importantly, it will remind us that the taboo itself – the code of silence – is a horrible tragedy.”

He concludes: “Glenda Mathes’ Little One Lost powerfully directs our attention to the One who suffered the loss of his own Son.  It draws our thoughts and affections to the One who Himself suffered to the utmost.”

Second, I discovered that the Three R’s blog is offering a free copy of Little One Lost to someone willing to review it for The Standard Bearer.

Third, in a great new review on Amazon, John Mahaffy (OPC minister) concludes: “I purchased multiple copies, so as to be able to give a copy of this book to someone who needs it. The target readership of this book is apparently the Christian community. Mrs. Mathes, however, points so clearly to Christ as the source of comfort that this sensitively written book may be an appropriate gift to a griever who does not yet know the Lord.”

Fourth, Nick Smith has published on his blog and on Amazon some excerpts from a longer review essay he’s written.

Just a reminder: Little One Lost is available from the online store of the publisher, Reformed Fellowship. It is also available from Amazon and other online outlets.

4 thoughts on “New reviews of Little One Lost”