The following article by Glenda Mathes appeared on pages 12-14 of the July 27, 2011, issue of Christian Renewal. 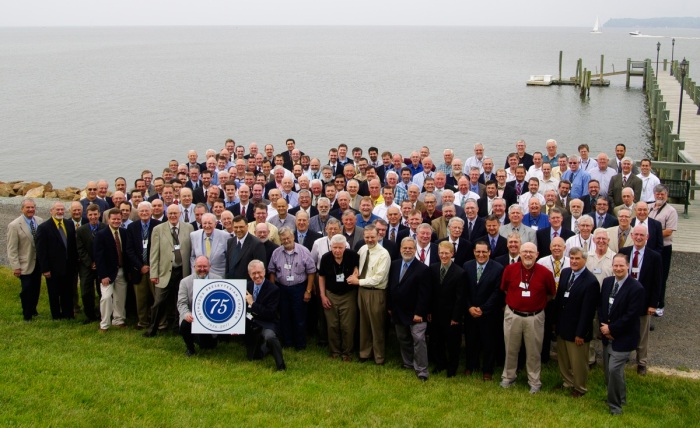 You may wonder why the Orthodox Presbyterian Church (OPC) celebrated its 75th anniversary at its 78th General Assembly (GA).

According to Assistant Clerk, Rev. John W. Mahaffy, the February 1939 GA “focused on the name issue, made a decision not to appeal the court ruling, and after extensive debate, selected the name Orthodox Presbyterian Church.” A subsequent GA met in May of the same year to deal with regular business matters.

“We have had only one GA per year since,” Rev. Mahaffy explains, “but that is why the 78th GA was the one celebrating the 75th anniversary of the church.”

Celebration and fellowship characterized the 78th GA when it met from June 8-15, 2011, at the Sandy Cove Conference Center on Chesapeake Bay near North East, Maryland. That family-friendly location contributed to the pervasive camaraderie.

“General Assembly this year was marked by a particular tone of celebration because of God’s faithfulness to the OPC over the past 75 years,” observes Rev. Danny Patterson (Second Parish OPC in Portland, Maine). “Men were often heard, in their prayers and reflections, quoting Psalm 115:1, ‘Not to us, O Lord, not to us, but to your name give glory, for the sake of your steadfast love and your faithfulness.’”

A light agenda contributed to the celebratory atmosphere while special presentations highlighted the history and work of different OPC programs. More than usual ecumenical observers and delegates were present during this year’s GA to share in the celebration.

“The assembly was very blessed to have sister churches incur the time, loan the personnel, and shoulder the cost of travel in order to express their unity with us in Christ, and also in order to share our joy and gratitude on the occasion of this blessed milestone,” says Rev. Jack Sawyer, corresponding secretary for the Committee for Ecumenicity and Interchurch Relations. “I believe the number of fraternal delegates indicates that the OPC has exercised and continues to exercise, in the providence and by the grace of God, a far more wide-ranging and influential ecumenical influence in the Reformed world than her size would have led one to expect.”

In between welcoming various representatives from other ecclesiastical bodies, commissioners decided to cooperate with the URCNA in the production of a new songbook, discussed the OPC’s disaster relief effort in Japan, and handled one overture as well as one report. The singular overture before commissioners dealt with discord within a presbytery regarding subscription and creation issues. The report was from a special committee working to resolve tensions in another presbytery.

Reminding commissioners of Christ’s prayer for unity, Rev. Alan Strange, chairman of the Psalter-Hymnal Special Committee, reported that the Lord has opened a door to cooperative efforts with the URCNA. Although the two federations have worked separately up to this point, they have focused on different divisions that are complementary. The OPC Committee is finishing work on the psalm section, while the URCNA Committee has produced a hymnal proposal.

Rev. Everett Henes (Hillsdale OPC in Hillsdale, MI) wrote in his online report (opc.org/GA), “…the General Assembly voted to approve the Psalter-Hymnal Special Committee working together with the URCNA Songbook Committee with a view to producing a joint OPC/URC Psalter-Hymnal. The Assembly also approved extending an official invitation. The Assembly rejoiced that Psalm 133 could be seen in such a visible way with our brothers and sisters in the URCNA: ‘Behold, how good and pleasant it is when brothers dwell in unity!’ (Ps. 133:1).”

The OPC has sponsored mission work in Japan for many years and some OPC missionary personnel were first responders after the devastating earthquake and resulting tsunami. Mr. David Nakhla, the OPC’s first Short-Term Missions Coordinator who led a disaster relief team to Japan, explained how to coordinate mission efforts with ministry work. Congregations of the OPC have contributed over $375,000 in Japan relief funds. Mr. Nakla reported that Japanese Christians constitute only one half of one percent of the country’s population, but these few Christians are making a significant impact by proclaiming the gospel while providing disaster relief.

Rev. Calvin and Edie Cummings, who have served as missionaries in Japan since the early 1970s, were also present at this year’s GA. Rev. Cummings conveyed the gratitude of the Japanese Christians for prayer and financial support in the aftermath of these tragedies. He spoke of how God has used these events for good by opening the hearts of many people to the truth of God’s Word. He requested prayer for the missionaries and the church in Japan as they continue to minister and witness, as well as prayer for the Japanese people to see their need for forgiveness through Christ.

The single overture facing commissioners this year came from the Presbytery of Northern California and Nevada, which has struggled in recent years due to differing views of subscription to confessional and extra-confessional documents, particularly with regard to candidates’ views of creation.

The overture asked for a special committee to assist the Presbytery in working through “a serious division” affecting its “functioning as a Church of Christ.” The overture noted this was a “continuing problem” going back as far as “September 1995 and made most evident” as a result of the 2004 Creation Report and its accompanying recommendations.

The first ground for the overture stated: “There has been an ongoing division over subscription to our secondary standards, the days of creation, and the application of the passed recommendations by the Assembly of the 2004 Creation Report.” The second ground read: “We as a Presbytery have tried in the last three years to work through our differences and have not been able to achieve reconciliation.”

A related communication provided additional background information, noting that during the last few years the “division…has been demonstrated at least six times when candidates have been questioned…when examined in theology.” It listed 15 different opinions held by Presbyters that “prevent…working together harmoniously….”

Assistant Clerk Rev. Mahaffy explains that “the issues involve not only creation, but also views of subscription and ecclesiology.”

The Assembly approved the appointment of a special committee to visit the Presbytery with a mandate to assess the causes and extent of the “serious division” and to “facilitate…reconciliation” before reporting to the next GA.

According to Rev. Henes’ online account, a committee appointed by last year’s GA reported that its work within the Presbytery of New Jersey was progressing “with everyone working together and all parties receptive to the meetings.” The committee will continue it work for another year.

“For a couple of years the Assembly had handled judicial appeals and complaints involving that presbytery and a particular congregation in the presbytery,” explains Rev. Mahaffy. “Last year we set up a committee to do some pastoral work with those involved. This Assembly heard the brief report and there was no need for further action. I expect the committee will give its final report next year.”

Rev. Alan Pontier, pastor of Big Bear Valley OPC in Big Bear City, CA, and moderator of last year’s GA, writes that the Home Mission audio/visual presentation tracing the history of OPC church planting was “very well done and featured recently discovered movie footage of the early years of some of our churches.”

“Foreign Missions (led by General Secretary Mark Bube) gave an overview of the breadth of current OPC foreign missionary work,” he continues. “What struck me is how much work is getting done in several countries by a relatively small church.”

General Secretary Danny Olinger presented a historical overview of the Committee on Christian Education. Another part of this presentation was a speech by Rev. John P. Galbraith. Rev. Pontier relates that Rev. Galbraith has become a friend over the years and this presentation was by far “the most special event” for him personally. 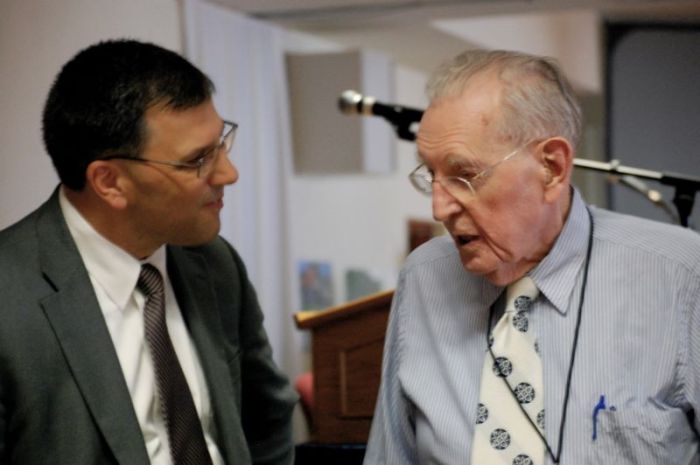 “The main feature of this presentation was a speech by John Galbraith who is now 98 years old and, I believe, is the last living person to witness the forming of the OPC in 1936,” he writes. “Galbraith was not yet ordained at the time, but he and his family attended the meeting and helped constitute the church at what became the first General Assembly. Mr. Galbraith spoke for about 20 minutes (without notes) and in spite of his age was dynamic, gracious and clear.”

Rev. Henes reported, “At 98 years old, Mr. Galbraith’s body might move slower than it once did, but his voice was strong and clear as he opened with the words of the Apostle Paul from Romans 7:15, ‘I do not understand my own actions. For I do not do what I want, but I do the very thing I hate.’ What followed was a presentation that was part history, part proclamation and part exhortation…. All those gathered expressed their appreciation and Mr. Galbraith could be heard saying, after the standing ovation ended, ‘All praise goes to the Lord!’”

Other features of this year’s GA included special worship services on Sunday and a Saturday evening 75th anniversary banquet. Following the banquet, Rev. Donald M. Poundstone spoke on “The OPC at Seventy-Five: A Witness to the Truth and the Heavenly Kingdom (Reflections on John 18:36-37).”

“The evening ended with prayer and the singing of the Doxology,” writes Rev. Henes. “All praise goes to God, for it is through his goodness and mercy that a church made up of imperfect people can make it through 75 years, remaining faithful to the proclamation of the gospel. May God see fit to grant us many, many more years of faithful service to his kingdom.”