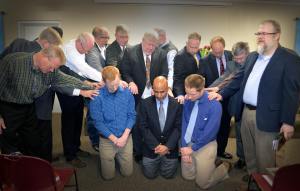 An OPC mission work in San Antonio organized in a special service held February 10, 2017. Rev. Andrew Moody, who has served as the group’s church planter, was installed as its pastor. Elders Amit Kholsa and Thomas Roe and deacon Kyle Huizenga were ordained and installed.

About 100 people attended the service, including several Presbytery of the Southwest pastors, who participated in various ways.

Rev. Dr. Glen Clary (Providence OPC in Pflugerville, TX) preached from 1 Timothy 3:14-15 on “How to Behave in Church.” Referring to this and other texts in Paul’s letters to Timothy, he focused on three areas: worship, government, and discipline. He noted the priority of prayer in worship and how a minister must devote himself to preaching and teaching God’s Word. Worship must be done decently and in good order to reflect the character of God, whom we worship and who is with us when we worship. Church government should also be well-ordered because Christ governs the church by His word and Spirit. He does so through ordinary men who’ve been ordained to their offices and carry out their ministry under His dominion and direction. Finally, the church ought to be well disciplined because discipline is the means by which the Good Shepherd brings wandering sheep back into the fold.

Rev. Mark Sumpter (Regional Home Missionary for the Presbytery of the Southwest) exhorted the congregation to rely on God for discipleship strength in seven ways: 1) Be spiritually fervent in serving the Lord. 2) Be patient in enduring hardships. 3) Anticipate a variety of gifts in the body of Christ. 4) Remember to treat one another as gifts purchased by Christ’s blood. 5) Be eager to receive the preached Word with meekness. 6) Take up prayer and your post, eager to live out a witness for Christ. 7) Children and young people should realize they are being trained to make up the church of today as well as of tomorrow. 8) Make much of sin, but make more of Christ.

In the administering of vows, Rev. Todd Wagenmaker (Covenant OPC in Ft. Worth, TX) addressed Pastor Moody, Rev. Bob Cannode (Providence OPC in Pflugerville, TX) spoke to the congregation, and Rev. Dr. Alan Story questioned the new elders and deacon. Rev. Andrew Moody prayed during the laying on of hands for the three officers.

Rev. Dr. Jim Cassidy (South Austin OPC) then gave the charge to the new office-bearers. Focusing on 1 Corinthians 4:1&2, he said, “Regard yourselves as servants and stewards.” He noted that being ordained is not a promotion, but a demotion as one goes from those being served to someone who serves. He acknowledged the authority of office-bearers, but reminded them it was not a license to lord it over others. He concluded by urging the men, “Be faithful servants.”

Out-of-town Presbytery visitors enjoyed a meal in the Moody home prior to the service, and all attendees were invited to a reception following it.

“Many people stayed for up to two hours after the service to fellowship,” Rev. Moody said.

“It is a 16 x 20” calligraphy that features Psalm 127:1 and Ephesians 2:19-22,” explains Rev. Moody. “It will be signed by our current members and framed to commemorate the Lord’s faithfulness in building His church.”

San Antonio Reformed Church began as a home Bible study in March of 2011. Its first worship service was held on October of 2011, and Pastor Moody was installed as an evangelist to continue his church planting work in May of 2012.

The group recently began renting a storefront space on the north side of San Antonio’s inner circle of freeways (8705 Botts Lane). Up to this point, the congregation has functioned under the oversight of elders from Grace OPC, which is about 20 minutes away. Grace has also provided financial support for the fledgling group.

“We have been blessed to have the session of Grace OPC oversee the life and ministry of the church for several years,” said Rev. Moody. “Now, the Presbytery has ordained and installed our own church officers.”

He adds, “This is a huge milestone for San Antonio Reformed Church. We are excited to see how the Lord will continue to grow His church and use us to glorify His name!”

The above article by Glenda Mathes appeared on pages 6 & 7 of the March 22, 2017, issue of Christian Renewal.