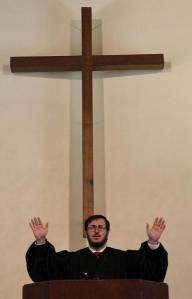 In 2013, Christ United Reformed Church in Santee, CA, welcomed Mihai and Lidia Corcea, a young couple who had traveled from Romania for Mihai to study at Westminster Seminary California. During 2016, Mihai graduated on May 28, sustained his candidacy exam by Classis SWUS on July 19, and was ordained on July 24. The couple returned to Bucharest on July 25, where they began a church plant.

“It has been a tremendous blessing to see how the Lord has answered our prayers for Mihai and Lidia,” Rev. Michael Brown says. “I met Mihai years ago, when he and another member of the core group in Bucharest, Claudiu Stefu, travelled to Milan for its Reformation conference. He told me about the desperate need in Romania for solid churches to be planted. He explained that, besides a few Hungarian-speaking churches, there is no Reformed presence in Romania, nothing to reach the Romanian-speaking population. I was impressed with Mihai’s passion about bringing the gospel to his native country and planting confessional churches. It was obvious that he had given much thought about how to do in Romania what Rev. Ferrari was doing in Italy. We discussed the challenges and obstacles to planting a Reformed church in Bucharest. At the time, it seemed almost impossible, little more than a dream.”

He adds, “But of course, with God all things are possible. Within a couple of years, Mihai and Lidia left their jobs and home in their native country and made the long journey to California.” Mihai began his seminary studies, and the couple attended Christ URC, where they warmly bonded with their church family.

Mihai served a year-long internship at Christ URC, attending consistory and council meetings, teaching catechism classes to youth, and going on home visits with the elders. He also led worship and exhorted at least once per month.

“We were pleased with his maturity, humility, and wisdom,” Rev Brown says. “We had the joy of watching Mihai and Lidia grow in their faith as well as their love for Christ’s church.”

Rev. Brown says Mihai did “an exceptional job” on his candidacy exam, “which is especially remarkable when you consider that he did this in a second language.”

At Mihai’s ordination service on July 24, Rev. Brown preached from Ephesians 4:1-16 and gave the charges to the pastor and congregation. Rev. Corcea pronounced the benediction. He is now a Missionary Pastor, called to make disciples in Romania by planting a church in Bucharest and evangelizing the lost.

“I think the best way I can describe the church that we hope to establish in Bucharest is by the three parts of the Heidelberg Catechism,” Rev. Corcea says. “Our church plant should be a people gathering in a place where they understand their sin and misery, they receive the knowledge of God’s merciful salvation through the gospel, and they start living more and more according to all the commandments of God out of thankfulness for God’s grace.” 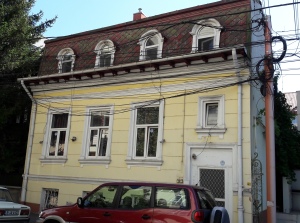 The Evangelical Reformed Church in Bucharest (Biserica Evanghelica Reformata din Bucuresti) began meeting in a rented building in downtown Bucharest. It is about three minutes walking distance from a subway station and two blocks from the city’s largest park.

“We chose this location because it is easily accessible to anyone by car or subway,” he says. “We are also very close to the financial district where most young professionals work.”

A few local Reformed Christians, who had became members of Chiesa Riformata Filadelfia (Rev. Ferrari’s work in Milan) four years ago, now attend services at 10 AM and 6 PM. Church members are inviting friends and family to worship, and the group utilizes social media, such as Facebook, and have a website, where they post video recordings of the sermons.

Although Milan is a two-hour flight away, the two church plants encourage each other. The consistory of Christ URC supervises both groups by maintaining regular contact with the pastors, encouraging them, and helping raise funds for support. Each church planter reports via Skype at Christ URC’s month consistory meetings and communicates weekly via email. The hope is for Rev. Brown and an elder to visit Bucharest in conjunction with their annual visit to Milan.

“We believe that an annual visit to our missionaries from a member of our consistory is an important component of effective oversight,” Rev. Brown says, “as it helps us to encourage them on the field and maintain our fellowship with them.” 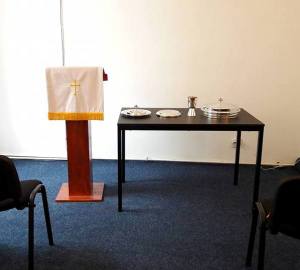 While Mihai was growing up, his family left Eastern Orthodoxy to become Baptists. But he experienced a great deal of religious confusion as a young person. The Bible began to make sense for him when he started reading Reformed literature. His stint at Westminster and time at Christ URC have shaped the way he envisions the Reformed church in Bucharest.

“Spending three years in an URC church in California has helped me understand more that church is not an add-on to our ‘relationship with Jesus,’ but the main way through which God has promised to bless us. As I preach every Sunday and I look at the covenant children present in our church plant, I am reminded of God’s grace to them that they have the opportunity to grow up in a church where they are catechized according to the truth of the gospel. I rejoice in the fact that, Lord willing, they will not have to go through the same confusion and pain of not having a healthy church close to them.”

In addition to the work involved with planting a church, the Corceas plan to begin publishing Reformed literature that they have translated over the last three years. He says, “We hope that by this small Reformed publishing house, we will be able to raise awareness of the Reformed church and the Reformed doctrine and practice.”

The Corceas appreciate the financial support they received during Mihai’s seminary years, saying they are “greatly thankful” for the “love and generosity” of individuals and churches.

Rev. Brown explains that the Romanian mission work is funded by URCNA congregations who wish to participate in “this exciting opportunity to make disciples in Romania and establish a confessional and Reformed denomination in that country.” He adds, “We encourage all churches in the URCNA to consider supporting this mission, helping us to shoulder the burden of this worthy labor for Christ and his gospel.”

The above is a slightly edited version of an article by Glenda Mathes that appeared on pages 18 & 19 of the September 21, 2016, issues of Christian Renewal.