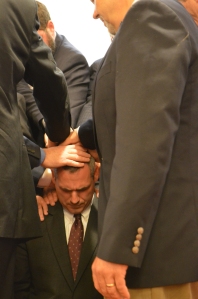 It’s a long journey from a prison cell to a church pulpit, but Lowell Ivey has traveled it by God’s grace. On May 27, 2016, the former prisoner was ordained and installed as the organizing pastor for Reformation Presbyterian Church in Virginia Beach, VA.

“My testimony is the Lord’s testimony as he’s worked by his mighty grace and power in my heart and life,” he says, “and even been so gracious as to give me a covenant family.”

Abandoned by his birth parents, Lowell grew up with a rebellious nature and angry heart. He began stealing as an adolescent and was sent to prison for armed robbery as a young man. During his first six years in prison, he hated Christians. He enjoyed arguing with them and trying to prove them wrong, even using the Bible against them.

Lowell found his identity in a white supremacist gang, and his attempt to murder a member of another gang landed him in solitary confinement. Alone in his cell one night in 2000, listening to the radio, he heard the gospel proclaimed.

“That radio program showed me the depth of my depravity and wickedness,” he says, “and that it wasn’t something I could change.”

He couldn’t change himself, but the Holy Spirit transformed him. “One moment I felt as if I couldn’t do it. I couldn’t repent. But the next moment, the Lord by his mighty power broke all that, took it all away. And I fell on my knees beside my bunk, weeping, asking him for forgiveness. But not only that, asking him to change my life, to change my heart so that I would begin to live only for his glory, the glory of my Savior, the Lord Jesus Christ.”

During the remaining nine years of his incarceration, Lowell gradually moved through the slow process of sanctification. He embraced the Reformed faith through Ligonier’s “Renewing Your Mind” radio broadcasts. He grew in that faith by reading catechism sermons of Dr. Joel Beeke (Puritan Reformed Theological Seminary). And he contacted Rev. Nathan Brummel, (director of Divine Hope Reformed Bible Seminary), who regularly wrote to him and sent him theologically sound literature.

As Lowell grew in the faith, he thought about the need for prisoners to be discipled in the Reformed faith and considered serving in prison ministry some day. Prior to his release, Rev. Brummel put him into contact with Rev. Phil Hodson, a local OPC pastor.

Lowell says about Rev. Hodson, “He was a mentor to me after I was released from prison and even invited me to live in his home for a time. I became a member of the church he serves, Christ the King OPC in Longview, TX, where I also met my wife, Mae.”

Still thinking in terms of prison ministry, Lowell began seminary training in Texas in 2010, but then transferred to Greenville Presbyterian Theological Seminary (GPTS) in 2011. He attended Covenant Community Church (OPC) in Taylors, SC.

“In seminary, and through the influence of my pastor, Rev. Peter VanDooedewaard, I began thinking more about pastoral ministry,” he says. “While I wanted to continue ministering to prisoners, I became increasingly convinced that the Lord was calling me to a broader ministry.”

In Lowell’s senior year at seminary, the session of his church discussed having him serve a pastoral internship. Early in 2015, he received a call from Rev. DeLacy Andrews, Regional Home Missionary for the Presbytery of the Southeast, to see if he might consider helping establish the church plant in Virginia Beach. Although Lowell was interested, he and his church session agreed that he should proceed with the internship.

“My prayer at that point was, ‘Lord, I want to go wherever You lead me. If it’s Your will for me to serve in Virginia Beach, I know you will keep the door open,’” he says. “I let Pastor Andrews and the Pulpit Search Committee know that I was withdrawing my name from consideration for the time being.”

Lowell graduated from GPTS in May of 2015 with his Master of Divinity degree and went on to serve for the next year as an intern in his church. When Lowell’s internship neared its conclusion, Rev. Andrews contacted him again. The Virginia Beach group still had not secured a pastor. The Search Committee interviewed Lowell in January of 2016, and he spent ten days in Virginia Beach in February, preaching, teaching, and visiting families. On the last day of February, the congregation voted unanimously to request the Presbytery to call him as its organizing pastor.

Presbytery approved his call when he sustained his examination on April 22. Lowell and Mae and their two children moved to Virginia Beach on May 10, and he took up the work there on June 1.

“Looking back on it now, I can see how faithful the Lord was in leading me as He did,” he says. In addition to learning from Pastor VanDoodewaard during his internship, Lowell served alongside a refugee pastor who had suffered intense persecution, including imprisonment and torture. “The internship was crucial to my growth in pastoral ministry. I’m using the lessons I learned every day in my calling here in Virginia Beach.”

Several men who participated in Lowell’s ordination and installation service on May 27, have been influential in his journey from prison to pulpit.

Although Reformation Presbyterian Church is a mission work of the Presbytery of the Southeast, the Presbytery of the Mid-Atlantic has assisted in the effort. Regional Home Missionaries from both presbyteries, who have been involved with the church plant, took part in the service. Rev. DeLacy Andrews (RHB, Southeast) provided instructions regarding the office of minister. Rev. Steve Doe (RHM, Mid-Atlantic) gave the charge to the congregation. Rev. Jay Bennett, Moderator of the Presbytery of the Southeast, officiated the service. Rev. Peter Stazen, pastor of Grace OPC in Lynchburg, VA, and member of the provisional session of Reformation Presbyterian Church, led a prayer of adoration and the invocation.

Dr. Joseph A. Pipa, Jr., president of GPTS, gave the charge to the evangelist. Dr. L. Anthony Curto, Associate Professor of Missions and Apologetics at GPTS, supervised the laying on of hands and offered a prayer of ordination.

“I am amazed at how God has poured out His grace in Jesus Christ upon Lowell,” Rev. Brummel says. “God has showered him with grace upon grace. He immediately transformed Lowell at the moment of his conversion from a proud racist member of a dangerous prison gang, into a humble, loving servant of Jesus Christ. God has given Lowell a Proverbs 31 wife and two beautiful covenant children. May God be glorified through Lowell as this new OPC minister begins his evangelistic and pastoral ministry in Virginia Beach.”

Rev. Phil Hodson was not able to be present, due to a death in the family. Having spent years as Lowell’s pastor and observing him in the church community, he says, “We have seen in Lowell a mature understanding of the Reformed faith, a faithful handling of the word of God, and a good grasp of biblical and systematic theology. We have also seen him attain to these things by adorning them with a faithful walk before the Lord. His manner and speech are crowned with actions that demonstrate the sacrificial love of Christ. He joyfully confesses that he is a ‘prisoner of the Lord,’ and embraces whatever circumstances the Lord calls his to. He does not pursue the credit for labors he has been engaged in. Rather, he is focused on bringing attention to Christ and to serve His glory.”

Rev. Ivey explains that Reformation Presbyterian Church (RPC) has met since 2012, first with informational meetings and then home Bible studies, led by Revs. Andrews and Doe, Regional Home Missionaries. Worship services began in November of 2013, and the session began searching for a church planter in 2014.

Rev. Ivey says, “The church is vibrant, friendly, historically Reformed in terms of its confessional stance and its worship, and has a passion for outreach and evangelism in the Tidewater region.” He describes that area of eastern Virginia as containing 1.5 million people, more than 60 percent of whom profess no religious affiliation.

The RPC group meets for 11:00 AM worship at Fleet Reserve Association, 357 Edwin Drive, and for 6:00 PM worship at Indian Lakes Community Center, 1313 Indian Lakes Blvd, both in Virginia Beach. For more information on the church plant, see its website.

The above article by Glenda Mathes appeared on pages 16-18 of the July 6, 2016, issue of Christian Renewal.

One thought on “Transformation: From prison to pulpit”