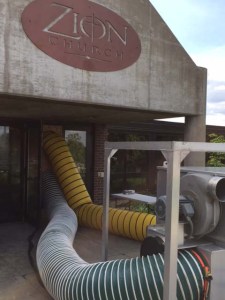 That’s how Senior Pastor Stu Kerns described the phone call informing him of a fire at Zion Church (PCA) in Lincoln, NE. This was the second time he’d received such a call. The previous building at a different location had been completely destroyed by fire in 2007.

“I felt like this is a place I’ve been before that I never expected to be again,” he said.

Like that previous fire, the one on April 23, 2016, began in the kitchen. While structural damage was limited this time, smoke and water affected the entire building.

No one was injured in the fire, which was detected early and somewhat contained. The worship hall suffered the least amount of damage and may be the first space available again for use, but cleanup and repair will be a lengthy process. Books are a concern because all three pastors on staff had offices on site that included their libraries.

The church has a weekly radio show discussing news from a faith-based perspective. That program has increased its visibility in the community and networking opportunities with other churches, and local congregations rallied around Zion in the wake of the fire. Several offered use of worship spaces, including a Rabbi who said, “I know a place available on Sunday.”

About 200 people gathered for a song and prayer service held the day after the fire. Zion members participated in a joint worship service the following Sunday with two other congregations. The Zion congregation temporarily worships in a chapel made available by a local Catholic diocese. Two services are being held on Sundays, but no educational classes or midweek programs are scheduled at this time. Plans for VBS in June have been suspended.

Having gone through a similar experience only ten years earlier, Pastor Kerns was somewhat prepared for media attention. He stressed that the fire would not affect the church’s mission; that the church is people, not a building. He was able to testify how even this was for “our good and God’s glory.”

What surprised and gratified him, however, was a news reporter who came back to speak to him after talking with church members watching the fire from the sidelines.

“I’m a pastor,” he said, “so I say this all the time, but she told me how the people were saying the same thing: ‘God has a purpose, and we’re trusting Him.’ I’m so thankful they’ve internalized this truth and were able to express it.”

He added, “Our prayer is that we can be a positive testimony in the community for Christ.”

The above article by Glenda Mathes appeared on page 7 of the May 25, 2016, issue of Christian Renewal.