Since it’s inception in 2009, Providence Christian Academy in Indiana has grown in many ways. Student enrollment has increased from five students representing five families to 33 students in 13 families. The faculty has grown from one full-time teacher to four full-time and one part-time instructors as well as a part-time volunteer. The 2015-2016 academic year marks the school’s first with an administrator.

For the first couple of years, classes were held in one room at a retirement complex in Crete, IL, but the school soon outgrew that location and began renting rooms from Community United Reformed Church in Schererville. 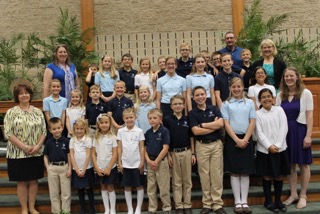 “Providence has been blessed to be able to use Community’s classroom space for three, going on four years…and is very grateful for the church’s hospitality during this time,” Mr. VanderWoude (who also serves as vice president of the school board) says. “The board anticipates needing to find a different rental facility…for the 2016/2017 scholastic year and is active in the search process right now for a facility that will meet our needs going forward.”

The school purchased 10 acres in unincorporated Lake County in 2013 and paid off that property loan in 2014. But construction plans remain undetermined as details regarding zoning and utilities must be worked out prior to applying for a special use permit.

“At this time, it is difficult for the board to estimate when building on the land could begin as there are many current unknowns,” explains Mr. VanderWoude. “We will move forward as we are able and by the Lord’s leading.”

Providence Christian Academy is a private, parentally-controlled school supervised by a five-member board from different area churches. Current students represent five URCs and an OPC. Dedicated parents and supporters help facilitate hot lunches once per week as well as providing transportation to and from classes and field trips.

The school emphasizes a determined Reformed perspective. Voting members of the school’s association must hold communicant membership in a NAPARC congregation. Nonvoting members must agree with the Three Forms of Unity and belong to a Reformed or Presbyterian Church.

“The Bible is at the center of all instruction and all teaching is done from a distinctively Reformed Christian perspective,” the school’s website states, stressing the school’s role as an extension of the Christian home. “We work together to achieve the goal not only to teach the children information and skills, but also to equip them with a Christian world and life view in order to fulfill our responsibility in God’s kingdom, preparing them for lives of service in the Kingdom of God.”

The school implements a classical model with Latin as a basic element of the curriculum and foundational to language arts.

“We are very purposeful in how the overall arc of the curriculum is delivered to preserve the fundamentals of the classical model from learning stage recognition, to integration across subjects, to the use of the great classical works to support learning,” says school board president Dan Bruinsma. But the model itself isn’t the goal. “I think the classical model is more in support of our goal to strive for excellence in our teaching and learning and the recognition that this model serves that pursuit very well.”

He adds, “For me personally, not speaking as board president but rather as supporting parent, I think of Providence Christian Academy as academically rigorous using a classical model, focused on excellence in all aspects of learning with the backdrop of likeminded families of faith who operate in the confidence that we are bound together by the essentials of the Reformed faith.”

The above article by Glenda Mathes appeared on pages 12 & 13 of the September 16, 2015, issue of Christian Renewal.