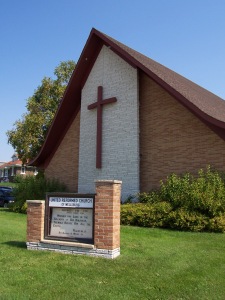 Who says a small church can’t do big things? With only 11 families on the membership rolls, the United Reformed Church of Wellsburg is Classis Central’s smallest organized church. But it hosts an annual women’s retreat that brings Christian sisters together from beyond ecclesiastical boundaries.

The annual retreat at a nearby Christian camp grew out of a yearly conference held in the church. In 2015, the church will host its third women’s retreat at Pine Lake Christian Camp. It will be the fifth year for an annual women’s event.

“It all started when I attended Revive Our Hearts True Woman Conference in 2010,” says Lisa Nuiver, wife of Pastor Matt Nuiver. She attended the pre-session for women’s ministry leaders and pastor’s wives, where she received an earlier conference DVD and suggestions for holding a women’s conference at her church.

Lisa was excited to share this excellent resource with the women in her congregation and longed to minister to area women. Those first two conferences were held at the church, with participants viewing the DVD.

“A neat little tidbit is that the men dressed in black pants and white shirts and served the ladies supper (the women cooked it, of course!),” she says. Attendance at those events averaged around 40 women.

It became more difficult for some of the older men to serve, and organizers began considering other options.

Lisa says, “I thought having a live speaker would draw more women, and I wanted to offer an overnight stay option (no hotels in/near Wellsburg!) so that we could expand the range of who we could invite.” 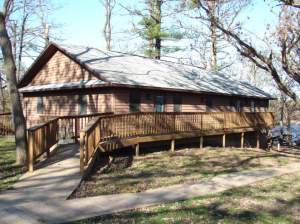 She discovered the local resource of a camp with facilities including cabins, lodge, dining hall, and a large meeting room equipped with modern audio/visual equipment. The women organizing the event changed the name from conference to retreat to better reflect the new location and format as well as the purpose of taking time out from busy lives to focus on Christ.

Lisa says, “Our first live speaker was Glenda Mathes with the topic, Soul Poems: Experiencing God in the Psalms.”

The second year’s speaker was Yvonne Welch, author of Spiritual Rest in the Life of a Woman. Attendance both years has been about 70-80 ladies. Lisa explains that more local women have attended each year, including those from URC, CRC, RCA, Presbyterian, Lutheran, Baptist, Quaker, and independent congregations.

Although organizers focused on Iowa churches in the past, they hope to invite women from churches on the east side of Classis Central US for 2015. Wellsburg’s centralized location means that most attendees wouldn’t have more than a four or five-hour drive. The 2015 Women’s Retreat has been set for March 20-21, and will feature speaker Barbara Duguid, author of Extravagant Grace, which is also this year’s event title.

While the Wellsburg URC is thrilled with the success of the women’s retreat, it also rejoices to witness other evidences of God’s blessing.

Profession of faith is always a cause for celebration, but imagine the joy when it’s the first young person born in the congregation to make profession during your ministry in a church and the single catechism student you’ve been teaching for years.

That was the case on August 31, 2014, when Pastor Nuiver performed the ceremony as Cortanie Nederhoff publicly professed her faith in the Lord Jesus Christ. Tears of joy filled the eyes of more than one of the members and guests present.

Rev. Matt Nuiver is a 2004 graduate of Mid-America Reformed Seminary who has served the Wellsburg congregation since 2009. He also currently serves as Dean of Students at Timothy Christian School in Wellsburg, dealing primarily with student discipline and staff issues. In that capacity, he’s on campus every academic morning with full days on Mondays and Wednesdays. He teaches seventh and eighth grade Bible classes on Monday-Thursday mornings and oversees chapel on Friday mornings. On Thursdays, he stays in Wellsburg on call.

When asked to reflect on the joys of small church ministry, Rev. Nuiver says, “Big church or small church, our joy in ministry is serving Jesus Christ and His people. In a small church, however, you know each of these people in a more intentional way. Those thirty to forty people are not only your congregation, but they are your friends, your helpers, your connection to the community, your encouragement, as well as those before whom you intentionally live an example of Jesus Christ.”

He relates that a good pastor friend of his once compared the joy of serving a large or a small church as the difference between a farmer and a gardener. “The farmer looks out at his fields and praises God for what He has done. The gardener looks at his garden the same way. However, he knows all the individual plants, what they need, how they are doing, how they struggle, and how to work with them so that they will flourish.”

The analogy holds up when comparing challenges. “While in a field there are many ears of corn or pods of beans, in a smaller garden, there just are not that many plants. When a farmer loses an acre of potential harvest, he feels it, but there are acres and acres more plants. In a garden, if you lose one of the plants you have nurtured and tended, that pain is felt as an exceptionally acute loss. When someone moves away or leaves a small church, it is a profound loss, felt by the pastor and his family as well as by the entire congregation in genuine grief.” Such losses can sow seeds of doubt regarding the church’s viability.

Rev. Nuiver explains that smaller churches typically have fewer men qualified as officebearers, which puts a strain on the few who serve. That also applies to other volunteers. “Greater levels of service are required from each member of the church, otherwise it becomes a clear and present danger that not only the pastor, but also members of the congregation will burn out.”

It’s difficult for a small church to draw in new members because visitors often are searching for a church home with more programs and children the same age as theirs.

“Beyond that, the challenges faced by smaller churches are exactly the same as larger churches because the work of the gospel is the same. It is a key understanding that sometimes is forgotten. ‘Oh, you pastor a smaller church? It must be nice to have all that extra time.’ But that’s not the case. Whether we are preparing a sermon for seven people or seven hundred people, the work and challenge are the same. If we are preparing for a Bible study or catechism class, the same amount of time is required in either context. And in a small church, there are going to be a host of duties that would usually be handled by elders, deacons, or gifted and able members of the congregation that the pastor will be responsible for simply from the standpoint of who is available and able to do such things.”

He also reflects that small church pastors may feel continual pressure, verbal or silent, for the church to grow and see fruits of faithfulness in terms of numbers. “Sometimes this is a matter of pride that needs to be repented of, but other times it is just a desire that comes from a right anticipation of harvest.”

When asked what other churches can do to help struggling congregations, he joked, “They could encourage some of their families to move to Wellsburg!”

He added, “The biggest thing that churches with more resources in terms of people or finances can do is simply be mindful of brothers and sisters seeking to be faithful in smaller church contexts, be they in established churches in difficult days or church plants just beginning to grow. When we’re aware of their burdens, we can more effectively pray for them and offer encouragement to them. If churches are within a reasonable geographic proximity, perhaps a few families could occasionally attend services at one of their smaller neighbors. Come and fill our chairs or our pews. Sing loudly. Have coffee and cookies with us. Get to know our families. Show them that there are other examples of families seeking to be faithfully Christian and reformed. Large churches with multiple pastors may be able to send one to provide supply in a smaller church so that its pastor could be blessed with a reading or planning week. If large churches are offering some kind of educational opportunity for the pastor or officebearers, perhaps they could invite the smaller church’s officers. Those gestures of encouragement and prayers go a long way in the life of a smaller congregation, and it shows us how God is at work in more than just our church as well.”

Because the URC is not the only small church in Wellsburg, local RCA and CRC churches cooperate in a shared Sunday school program, which the URC is hosting this year.

Last fall Lisa Nuiver led a study for women on Barbara Duguid’s Extravagant Grace to tie in with the upcoming retreat. The study was held on Monday evening so women from other churches who normally attend Wednesday evening activities might be able to participate. On the first Thursday of each month, Pastor Nuiver leads the Willing Workers women’s group is a study of the book of Exodus. He also leads a monthly men’s Saturday morning breakfast study called “The Pond” because participants meet at a pond on the property of one of the church’s elders.

Sunday worship services are held at 9:30 AM and 7:00 PM during Daylight Savings Time, with the second service at 3:30 PM during Standard Time. The church facility is located at 608 South Adams Street in Wellsburg, IA.

The above is a slightly edited version of the article by Glenda Mathes that appeared on pages 15, 32 & 33 of the September 24, 2014, issue of Christian Renewal.