“The sanctuary was built in 1954 and there is at least one couple who has been there since the start,” says Redeemer’s senior minister, Rev. Wayne Larson. “They have all been very sweet and accommodating. They have a lay pastor for whom I’ve already had the opportunity to provide supply twice. (Since I was preaching on Ephesians 1, I think I’m one of the few Presbyterian ministers who has been able to preach on the doctrine of predestination to a Methodist church in quite some time.)”

The group met for worship in the Raccoon River Park Nature Lodge in West Des Moines, but soon outgrew that space. 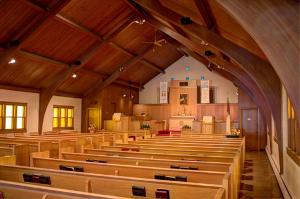 “In early 2006,” Rev. Larson says, “I set out about 320 letters to area churches asking if they could help us with any leads in finding a place to meet. One church, College Avenue Christian Church, received our letter the same week their pastor had announced that he was leaving. His departure forced the church to seriously consider whether or not they could continue. They viewed our letter as an answer to prayer.”

The two churches worked out a sharing arrangement that suited both so well it continued for the next seven years.

Late last year, the building in which the churches met was sold to a larger congregation whose requirements prohibited sharing the space with Redeemer. Because the arrangement with College Avenue Christian Church had worked out so well and since the congregation desired to remain in the Beaverdale area of Des Moines, Rev. Larson sent letters to several area churches. Christ UMS responded.

The Methodist congregation meets for morning worship at 9:30, with the PCA group following at 11:00. The building is on the northeast corner of Franklin and Merle Hay, at 5723 Franklin Ave. Between 80-100 people typically attend Redeemer’s services. Plans are to reinstate the Sunday school program in the fall. 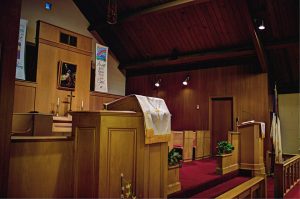 The church is also served by an assistant pastor, Rev. George Edema. He came as an intern in 2009 and was hired as an assistant. His responsibilities focus on youth, college ministry, and young couples. He also helps teach, having been ordained in 2011.

On the first of June, 2014, Redeemer held a meeting in Ames to determine interest in holding evening services there.

“The second service is only at the earliest of stages,” explains Rev. Larson. “We’re sort of trying to see if something like this is possible. We have several families who travel down each Sunday from Ames and there has been a desire to see a PCA church in Ames by our Presbytery for a long time.”

The above article by Glenda Mathes appeared on page 7 of the July 16, 2014, issue of Christian Renewal.