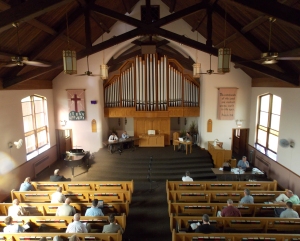 Attending the September meeting of Classis Central US of the URCNA was a genuine blast from the past. It reminded many older folks of childhood Sundays, when summer services were made more comfortable with whirling wall fans. But the past was only a memory as office-bearers looked to the future by examining two men as prospective ministers in Christ’s church.

Those two examinations were the primary matters of business when delegates met at First URC in Oak Lawn, IL, on September 9 & 10, 2013. It was the first time Classis Central US met in the historic and beautiful (if not air-conditioned) building.

Although from very different backgrounds, Pablo Landázuri and Robert Van der Woerd are both graduates of Mid-America Reformed Seminary (Robert in 2012 and Pablo in 2013) who share a burden to preach the gospel of Jesus Christ.

Pablo grew up in a nominal Roman Catholic home, but first heard the gospel when he began attending a Presbyterian church. He said, “One particular day I had a huge conviction of sin and I knew my only hope was the Lord Jesus Christ.” He eventually felt compelled to enter the ministry, but it was almost five years before God paved the way for him to attend Mid-America.

Robert was raised in a Reformed home, but his faith didn’t become real to him until late in his teen years. “I came more and more to realize it was time to confess sin and take my faith seriously,” he said. While pursuing a business degree, he felt a strong sense that he would not be content doing anything other than preaching. He entered seminary after his college graduation.

Pablo and Verenisse and their three sons are members of Faith URC in Beecher, IL, but currently live in Pella where he is serving a one-year internship at Covenant Reformed Church (URC). He hopes to return to Ecuador next year to work with his former pastor in preaching the Word and establishing Reformed congregations.

Robert and Rachel and their two sons are members of Lynwood URC in Lynwood, IL, but have been living in Sioux Falls, SD, where he served a summer internship with Rev. Spencer Aalsburg at the Sioux Falls URC Fellowship. Robert hopes for a call to a congregation within the URCNA.

On Monday evening, delegates evaluated sermons of each man during executive session, open only to office-bearers. Then Rev. Paul Ipema examined the men concurrently in the area of Practica, dealing with their Christian commitment and personal life.

The exams continued on Tuesday morning when Rev. Jody Lucero quizzed the men regarding Bible Knowledge. Prior to Rev. Bradd Nymeyer examining them in Biblical Exegesis (translating original languages), a motion was made to suspend classical rules in order to question the men individually. Following that section, Rev. Dan Donovan conducted the portion of the exam on Church Polity, which deals with ecclesiastical rules and procedures.

Before the lunch break, a motion was passed to reduce the length of the Confessional Knowledge and Church History sections from 60 minutes to 45 minutes in order to allow the exams to conclude by approximately 5:30.

After the lunch break, a motion was made to suspend the classical rules in order to schedule the spring meeting in early March rather than in April of 2014. The rationale was that this would allow Classis to table the four overtures on this meeting’s docket and discuss them at the next meeting, which would still be prior to the deadline for Synod 2014. The motion to suspend passed.

The first part of the afternoon was devoted to Confessional Knowledge with Rev. Todd De Rooy and Reformed Doctrine with Rev. Paul Ipema. In the second part of the afternoon, Rev. Spencer Aalsburg questioned the men regarding their knowledge of Church History. The exams concluded with Rev. Matthew Nuiver examining the men on the important subject of Ethics.

All delegates discussed the examinations in executive session, and the consistories of Faith URC in Beecher, IL, and Lynwood URC in Lynwood, IL, met for discussion during the evening break. Again in executive session, the consistories reported their determinations to the entire assembly, which then voted on each area by ballot. Later it was announced that Mr. Landázuri had sustained his examinations in six and Mr. Van der Woerd in two of the eight areas. The men need undergo exams in only the unsustained areas and will have to opportunity to do so at a future Classis meeting.

Late in the evening, delegates provided pastoral advice to three churches seeking counsel and elected several men to serve in various classical and federational roles. The four overtures on the agenda were tabled indefinitely. Redeemer URC of Orange City, IA, will serve as the convening consistory for Classis Central’s March 3 & 4, 2014, meeting.

Although the heat was a key feature of meeting during days of record-breaking temperatures, the members of First URC overcame the high temperature with their warm hospitality. They worked hard to provide delicious food and plenty of cool water to refresh delegates and promote the fellowship that transcends physical discomfort.

The above article by Glenda Mathes appeared on pages 14 & 15 of the October 2, 2013, issue of Christian Renewal.