After being unorganized for several years, the Covenant Reformed Church of Grande Prairie (AB) is once again an organized congregation in the United Reformed Churches of North America (URCNA).

Rev. William Van der Woerd, who has served the congregation for the past five and a half years, explains that the church’s council resigned in 2006. But prior to that, office-bearers arranged for the council of the Orthodox Reformed Church of Edmonton, AB, to provide care for the remaining members of the congregation.

“For nearly seven years, we have been under the oversight of the Orthodox Reformed Church of Edmonton, who regularly sent elders for a five hour drive north to Grande Prairie to make family visits and attend to the administration of the sacraments,” he says. “We thank them for their diligent service to the Church of Jesus Christ.” 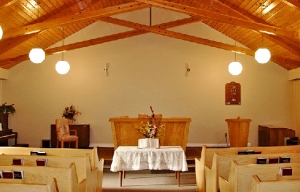 That long distance oversight concluded on December 30, 2012, when two elders and a deacon were installed in the Grande Prairie congregation. Rev. Van der Woerd conducted the installation service with Edmonton elder Peter Wright in attendance. The Covenant Reformed Church of Grande Prairie again became an organized URC congregation.
“Our goal is to proclaim the Word of God faithfully so that God’s covenant family in Grande Prairie may be regularly fed and spiritually nourished,” says Rev. Van der Woerd, “and to be witnesses of the power of the gospel so as to call others to repentance and faith in Jesus Christ.”

“Our hope is that the Lord will work in the hearts of others to join us in the task,” he adds, “and since Grande Prairie’s economy is booming and Grande Prairie is ranked among the top entrepreneurial cities of Canada, the area has a lot of potential for adventurous families who wish to pursue a career or business venture in a location that has a United Reformed Church.”

Rev. Van der Woerd accepted Edmonton’s call to serve the Grande Prairie group in 2007. The congregation now consists of seven families and seven singles for a total of 30 members. Worship services are held at 10:30 am and 3:00 pm each Sunday at the church, located at 10803 94th St. in Grande Prairie, AB.

The above article by Glenda Mathes appeared on page 11 of the January 16, 2013, issue of Christian Renewal.