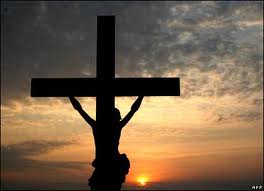 Before the psalter’s most famous and beloved Psalm 23, where vivid imagery of green pastures and still waters portrays the Lord as our sufficient Shepherd, we read in Psalm 22 of Christ as our suffering Shepherd.

This psalm, written about 1,000 years prior to the birth of Jesus (and hundreds of years before the practice of crucifixion), pulses with remarkably accurate Messianic prophecies, particularly those fulfilled in Christ’s death.

As if looking through focused binoculars, we clearly see Christ in the first line of Psalm 22. Christ repeated these words, written by David, in his fourth recorded saying from the cross:

My God, my God, why have you forsaken me?

John Calvin insightfully points out that David begins by confessing God as his own. His faith may have wavered, but it didn’t fail. Because Jesus repeated these very words on the cross, we know there is nothing sinful in feeling deserted or in questioning God this way. But we always do well to begin our groanings to God by expressing our continued belief in his existence and our profession in him as our personal God.

The remainder of verse 1 and verse 2 depict the agony of one who keenly feels far from God:

Feelings of abandonment can seem endless as we cry to God day after day or night after sleepless night. Certainly there were times during David’s protracted persecution at the hands of Saul or during other distressing struggles that he felt completely abandoned by God. Times when he groaned or even roared (as the King James Version translates the verb) in isolated agony. Yet he was never truly forsaken by God. But Jesus was. He took your sin and mine upon himself and bore the crushing weight of being genuinely abandoned by his heavenly Father. Every minute of such torment must have seemed forever!

The next three verses show David’s efforts to thwart the devil’s work in his heart and mind by focusing on God’s holiness and faithfulness:

Yet you are holy,
enthroned on the praises of Israel.
In you our fathers trusted;
they trusted, and you delivered them.
To you they cried and were rescued;
in you they trusted and were not put to shame (3-5, ESV).

The fathers of Jesus according to his human line included David; both David and Jesus were sons of Israel. The Old Testament records how Israel trusted in God and he delivered them time and again when they cried to him. God’s people still see God’s deliverance when they trust in him, and they still sing praises to the Holy One.

The next section of Psalm 22 again brings Christ’s crucifixion into sharp focus (6-8, ESV):

But I am a worm and not a man,
scorned by mankind and despised by the people.
All who see me mock me;
they make mouths at me; they wag their heads;
“He trusts in the Lord; let him deliver him;
let him rescue him, for he delights in him!”

Who can read this without thinking of the insults hurled at our Lord? The robbers crucified with him and the spectators passing by derided him. The chief priests, scribes and elders mocked him, saying, “He trusts in God; let God deliver him now, if he desires him” (Matthew 27:43; v. 39 even mentions the spectators’ wagging heads!).

David again confesses God as his personal God while he professes that the sovereign God, who has providentially cared for him since before his birth, is his only help:

Yet you are he who took me from the womb;
you made me trust you at my mother’s breasts.
On you was I cast from my birth,
and from my mother’s womb you have been my God.
Be not far from me,
for trouble is near,
and there is none to help (9-11, ESV).

We see how these words apply to Jesus when we consider that as the only God-man in history, he must have had from his human infancy a unique awareness of his relationship with God the Father. When Christ hung on the cross, no one came to his aid. But even in his death, he continued to trust in the One who had been his God from his birth.

David compares his enemies to beasts: strong bulls and a ravening lion.

Many bulls encompass me;
strong bulls of Bashan surround me;
they open wide their mouths at me,
like a ravening and roaring lion (12-13, ESV).

The bulls of Bashan were not skinny desert bovines on spindly legs; they were well fed creatures with the strength of an ox. Being surrounded by a herd of snorting Bashan bulls would strike terror into the heart of the most stalwart man. But it wasn’t only their horns and hooves that threatened, it was their lion-like mouths, open and ready to rend. David was often surrounded by cruel enemies and Christ was surrounded by a crowd of taunting mockers. But the real enemy behind the scenes is always the one who goes about like a roaring lion, seeking someone to devour (1 Peter 5:8).

The following verses reflect David’s state of anxious fear while fleeing for his life in the desert, where he once famously longed for a drink from the well near Bethlehem’s gate (1 Chronicles 11:17, ESV).

I am poured out like water,
and all my bones are out of joint;
my heart is like wax;
it is melted within my breast;
my strength is dried up like a potsherd,
and my tongue sticks to my jaws;
you lay me in the dust of death (14-15, ESV).

But the verses more effectively mirror Christ’s horrendous sufferings on the cross. If Christ’s fourth saying quoted the first verse of this psalm, is it too much to imagine that he may have had these verses in mind when he spoke his fifth saying, “I thirst” (John 19:28)?

David’s enemies probably gloated over his misfortune when he fled and became physically gaunt, but he likely speaks metaphorically when he writes of enemies dividing his garments and casting lots for them. It’s clear, however, that God used David here to further prophesy about Christ’s crucifixion:

For dogs encompass me;
a company of evildoers encircles me;
they have pierced my hands and feet—
I can count all my bones—
they stare and gloat over me;
they divide my garments among them,
and for my clothing they cast lots (16-18, ESV).

These verses call to mind a jeering crowd around the cross, nail-pierced hands and feet, a naked chest with every rib visible, and garments divided among soldiers, except the tunic, for which they cast lots (John 19:23-24).

In the midst of his great distress, David cries to God for deliverance, trusting that he is able to save his life (19-21, ESV):

But you, O Lord, do not be far off!
O you my help, come quickly to my aid!
Deliver my soul from the sword,
my precious life from the power of the dog!
Save me from the mouth of the lion!
You have rescued me from the horns of the wild oxen!

God allowed Christ to die on the cross, but he delivered him from death through his miraculous resurrection from the grave!

David fully intends to praise God in corporate worship, and he is so confident of God’s deliverance that he writes as if it has already happened (22-26, ESV):

I will tell of your name to my brothers;
in the midst of the congregation I will praise you:
You who fear the Lord, praise him!
All you offspring of Jacob, glorify him,
and stand in awe of him, all you offspring of Israel!
For he has not despised or abhorred
the affliction of the afflicted,
and he has not hidden his face from him,
but has heard, when he cried to him (22-24, ESV).

From you comes my praise in the great congregation;
my vows I will perform before those who fear him.
The afflicted shall eat and be satisfied;
those who seek him shall praise the Lord!
May your hearts live forever!

The final section of Psalm 22 displays the ascended and reigning Christ, who alone is worthy of all praise and adoration:

All the prosperous of the earth eat and worship;
before him shall bow all who go down to the dust,
even the one who could not keep himself alive.
Posterity shall serve him;
it shall be told of the Lord to the coming generation;
they shall come and proclaim his righteousness to a people yet unborn,
that he has done it (27-31, ESV).

A thousand years before Christ lived, David–by the inspiration of the Holy Spirit–prophesied in amazingly accurate language about his death. One day every knee shall bow and every tongue confess that Jesus Christ is King of Kings and Lord of Lords, to the glory of God the Father (Philippians 2:1-10-11). If you believe in him, you’ll bow willingly and confess in love. If not, you’ll bow and confess with shame and terror. See the Lord while he may be found (Isaiah 55:6)!