Although it’s rather old news by now, I intend to post my Christian Renewal reports on the URCNA Synod Nyack 2012 now that they’ve appeared in print.

The following overview appeared on pages 6-7 and 10 of the July 11, 2012, issue of Christian Renewal. My picture of the delegates appeared as a nice two-page spread (pp 8-9), large enough to identify individuals. 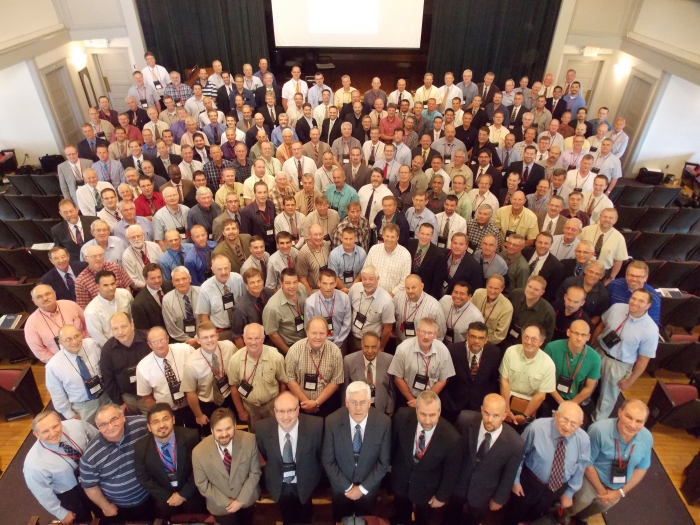 Synod Nyack 2012 of the URCNA met from June 11-15, 2012, on the scenic campus of NyackCollege in Nyack, NY, just north of New York City, in the beautiful Hudson RiverValley. Many of the painters in the Hudson River school were inspired by this valley’s vistas, and many sought to glorify God in their work. Delegates at Synod 2012 were also inspired by the surrounding beauty and desired to glorify God.

Since the URCNA is a fairly young federation, its synods came be compared to a growing person. Each year they demonstrate increasing maturity. Although Synod London 2010 seemed to me like an awkward teenager, Synod Nyack 2012 seemed like a young adult, settling into positive patterns and making wise decisions.

Pre-planning on the part of the convening consistory helped avoid procedural problems and an agenda that, while large, did not include any thorny theological issues, made this the most pleasant synod ever for many, including Chairman Ronald Scheuers who, in closing remarks that were at various times hilarious and moving, described this as his best and most enjoyable synod.

Visible unity and warm fellowship was aided by the lack of controversial theological issues in the 403-page agenda. Yet a significant factor was the compassionate and capable leadership of Rev. Scheuers, who began Synod by reminding delegates that he and the other officers were not here “because of power, but ultimately to serve for the glory of Christ.”

A prayer and worship service on Monday evening, June 11 set the tone. Delegates, wives, and others crowded the auditorium to pray for God’s blessing. Elder Steve Hanko, from Pompton Plains Reformed Bible Church, described it best when he compared the experience to the Holy Spirit’s arrival recorded in Acts, saying: “Tonight, the house shook.”

Accompanists for the evening were Shannon Murphy (Messiah’s Reformed Fellowship in New York) on the organ, Michael Kearney (West Sayville Reformed Bible Church) on the piano, and J. P. Galib on the trumpet. These young people did a great job of contributing to an incredible worship experience.

Following the worship service, Mid-America Reformed Seminary hosted a time of fellowship in Simpson Hall. Old friendships were renewed and new ones forged. Synod is a great time to put physical faces with virtual friends.

DECISIONS AT A GLANCE

Synod made two decisions that require ratification by two-thirds of the churches prior to January 1, 2013: Entering into Phase Two Ecclesiastical Fellowship with the RPCNA and changing Church Order directives regarding the emeritation of ministers. More information about these and many of the following matters can be found in subsequent and separate articles.

Synod voted without dissent to accept the offer of the Orthodox Presbyterian Church (OPC) to work cooperatively toward the production of a songbook that includes both psalm and hymn sections. Synod also approved many forms and prayers for provisional use in the churches.

Since the URCNA has struggled in the past with knowing how to view various documents adopted by its synods, Synod 2012 passed a recommendation that will greatly assist the churches. It adopted an appendix to the Regulations for Synodical Procedure that clarifies and defines synodical actions.

Synod adopted a report from the Study Committee on Doctrinal Commitment, prefacing the report with the newly adopted definition of “pastoral advice.”

Synod voted to enter into Phase One, Ecumenical Contact, with the Free Church of Scotland (Continuing) (FCSC) and the Free Protestant Church in Argentina (FPCA).

In spite of extensive debate, Synod adopted by a large majority Overture #1 regarding adding to the Church Order an appendix detailing guidelines for a “Thoroughly Reformed Theological Education.” (Note: “Minimum Requirements” was changed to “Guidelines.”) This action does not require ratification by two-thirds of the consistories since it is a change in the appendices and not the Church Order proper.

Even though it no longer has a specific mandate, the Proposed Joint Church Order Committee will remain constituted while churches review the provisionally adopted document.

Because the Joint Venture Agreement (JVA) is not able to distribute funds coming from Canadian churches to American causes, it will no longer collect such funds and will explore options for distributing the existing monies it holds. Synod adopted a budget with suggested “askings” of $13.60 per family.

The URCNA has one chaplain, Andrew Spriensma, currently serving in Germany. Faith URC in Beecher, IL, oversees his work and Synod appointed Faith’s consistory to serve as a liaison with the Presbyterian and Reformed Joint Commission on Chaplains and Military Personnel (popularly known as the PRJC).

Synod did not deal with Appeal #1 since it was determined that it did not meet the requirements for an appeal and would better come before Synod as an overture. Synod did not accede to the request to establish a standing committee for appeals. Grounds noted that the overture arose from the actions of one synod, that the URCNA has a process in place that should be followed, and that distributing appeal materials to delegates at their request sufficiently prior to Synod avoids problems. Synod dealt with several personal appeals and one communication in executive session. Another communication, which arrived the day before Synod, was not placed on the agenda since it failed to meet the deadline for materials.

Synod 2012 accepted the offer of Trinity URC of Visalia, CA, to host the next synod, which has been scheduled for mid-June of 2014.

Reflecting on this year’s deliberations, OPC fraternal delegate Rev. Alan D. Strange, of Mid-America Reformed Seminary, said, “I am, of course, thrilled with the way the whole Synod went, particularly with respect to establishing a missions committee and coordinator. I think the cohesiveness of the federation showed itself strong at this Synod and I am grateful for what the URC is poised to do, D.v.”

2 thoughts on “URCNA Synod 2012: A prayer-full gathering near the Hudson”