The following article by Glenda Mathes appeared on page 10 of the June 29, 2011 issue of Christian Renewal.

Immanuel’s Reformed Church in Salem, OR, is supervising a new Bible study effort with the hope of eventually planting a church in the Sandy, OR, area.

Rev. David Thommen, who leads the Bible study, successfully sustained his colloquium doctum at Classis Pacific Northwest in April and was installed on May 13 as a pastor under Immanuel’s supervision. 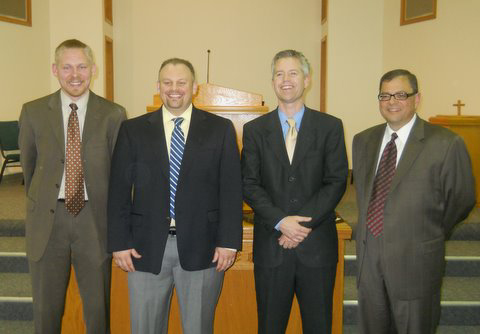 About nine families initially expressed an interest in the Bible study, which began meeting at 7:00 p.m. on Monday evenings earlier this year at the Immanuel Lutheran Church(39901 Pleasant St) in Sandy. The group is currently working through the book of Romans.

Prior to becoming associated with Immanuel’s URC, Rev. Thommen was the minister at Estacada Christian Church, which—although it had increasingly embraced the doctrines of grace—did not accept infant baptism or adopt the Reformed confessions. And Rev. Thommen desired to be part of a fully confessional church.

About three years ago, Rev. Thommen called Dr. Kim Riddlebarger, of The White Horse Inn radio program, and expressed his desire to plant a United Reformed Church. Dr. Riddlebarger suggested he contact his nearest URC, which was Immanuel’s. Rev. Thommen went through a gradual transition of working part-time in his original congregation to assisting with pulpit supply at Immanuel’s to being installed as a full-time pastor.

Leading the Bible study is not Rev. Thommen’s only responsibility. He preaches at a quarter of Immanuel’s services, assists with counseling and discipleship, and has been teaching the adult Sunday school class at Grace Church, Immanuel’s existing church plant.

He notes that Grace has been “financially self-sufficient from day one” and has even come alongside Immanuel’s to help support the work of Rev. Thommen. Grace Church’s financial obligations are increasing, however, as it adds to a building fund and hires a sign language interpreter to minister to several deaf attendees and one child member. Videos of the signed sermons are available on the church website: http://gracewl.org.

Those prayers seem to have been answered at Grace Church, which is served by Rev. Dan McManigal.

Rev. Tuininga explains that many members of Grace Church are new to the Reformed faith, which requires extra work and teaching from the leadership. In addition to providing Rev. Thommen to teach the adult Sunday school class, Immanuel’s also provides two inactive elders who assist the church plant with counsel and advice.

Immanuel’s URC trusts God to provide his continued blessing on their Grace Church plant in Gladstone as well as their new Bible study effort in Sandy.