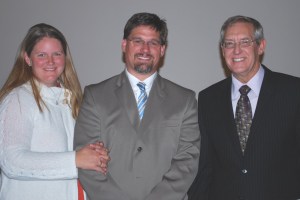 Rev. Anjema served Hope Reformed Church in Woodbridge, ON, for over ten years; for six and a half of those years, the congregation was the Orthodox Christian Reformed Church of Toronto (independent), but the name changed when the church affiliated with the URCNA subsequent to Synod Schererville 2007.

This June he received and accepted the call to Providence Reformed Church of Winnipeg (URCNA), which had been vacant for a year and a half.

“We are extremely blessed with the Pastor our Lord and Saviour gave to us,” writes Mr. Henry Nagtegaal, an elder and chairman of the consistory at Providence. “We prayed that we would be patient for the man of God’s choosing. God blessed us.”

Rev. Anjema was installed on October 14, 2010. Rev. Barry Beukema (URC of Thunder Bay, ON), who often filled Providence’s pulpit during its vacancy, preached from 1 Kings 22:7 on “The 401st Prophet.” Elder Nagtegaal closed in prayer.

“It was great to meet the church in Winnipeg for the first time,” says Rev. Cochran. “Providence URC is the church that sponsored my church, Redeemer Reformation Church (formerly Grace Presbyterian Church) in becoming members of the URC.”

Mr. Nagtegaal explains that Rev. Anjema is already busy in his pastoral work, teaching a catechism class on systematic theology to 17-year-olds, visiting senior members of the congregation, and preaching.

Rev. Anjema and his wife, Cher, have five children ranging in age from two to fifteen. Since they home school, their month of traveling didn’t interfere with the children’s education.

“We used that month to camp all the way up, enjoying the beautiful Northern Ontario landscape during the peak fall colour season,” writes Rev. Anjema. “We had the children do some schooling most days, either in the sun at the picnic table or in the trailer with the heater on—depending on the weather!”

While camping at Kilbear Provincial Park, near Parry Sound, ON, the family met the John and Helen Van Dyk family, who were also camping there that weekend.

Since the Anjema’s house in Brampton didn’t sell until the first of October, their belongings (transported by a moving van) went into storage and the family lived in temporary housing. They recently purchased a house in Winnipeg and look forward to moving in at the beginning of December.

Providence Reformed Church of Winnipeg consists of 52 families and about 260 souls. It meets for Sunday worship at 9:30 AM and 4:30 PM at 2615 Henderson Hwy.

“My general goals for the church here would be similar to most ministers,” says Rev. Anjema, “to preach the Word of God faithfully and to see the Spirit work as the people apply that Word to their lives; to see us all become more concerned for the spiritual state of our community and become a brighter light to those around us; to grow together in our love of God—in short to glorify God and enjoy Him forever!”

This article appeared on pages 15-16 of the November 24, 2010 issue of Christian Renewal