For years my motto has been, “No more pets and I mean it.”
After raising four children and dealing with their motley assortment of fish, newts, rabbits, gerbils, finches, cats, and dogs (one of which was hopelessly incontinent), I’d felt I’d had enough of pets to last a lifetime.
But lately Ariel’s little Yorkypoo, Layla, has made me sometimes think, “If we could ever find a dog with as nice a personality as Layla, I might not mind it so much.”
Enter Libby.

Weighing somewhere around one pound at eight weeks, she’s a tiny Yorkpoo who fits in the palm of my hand — or in a cup.
She’s the last puppy from Layla’s parents and she became available last week. We went just to look, but that intelligent salesman said, “Take her with you for a while.”
Of course, that was it. If we were going to keep her overnight, we needed the $18 two-tone pink plastic “pet taxi” and the $10 bag of “veterinary recommended” puppy bites. Not to mention the $3 pink collar and the $12 retractable leash. Once we had invested in those things and gotten through the first night, it made no sense to take her back.
From the start, it just seemed that Libby was the right name for such a little bitty thing. 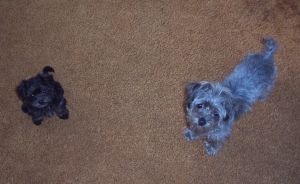 Libby’s first day at our house was spent with Layla, who is more than a year old and seems more than twice Libby’s size.
I confess I’ve had a few moments when I wondered, “What was I thinking?” Particularly since I have finally reached the stage in my life that allows me to concentrate on my writing. If there’s one thing a writer needs, it’s the ability to focus. And — as my son so astutely reminded me — pets take a lot of focus.
At a family gathering on Saturday, I said that my relatives probably noticed I hadn’t been able to eat much. I admitted it was because I was already full; I’d had to eat my words.