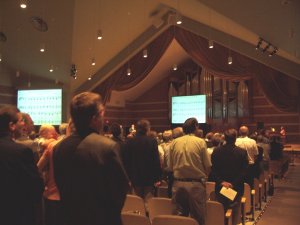 The number of overtures related to federative unity at Synod Schererville 2007 indicated the level of concern among the churches.

If the adoption and speedy implementation of URCNA unity committees was viewed as running to embrace the Canadian Reformed Churches with open arms, Synod Schererville’s actions could be viewed as the URCNA slowing to a walk and dropping its arms.

The URCNA may have dropped its arms, but it did not drop the ball.

Although the songbook committee’s mandate was clarified as focusly on a songbook for the URCNA, regardless of any possible mergers, it was noted that does not preclude continuing work with the Canadian Reformed Book of Praise Committee.

And although CERCU’s guidelines for Phase 2 and Phase 3 of federative relations were revised to slow down the unification process, Synod adopted an exception to the adopted guidelines allowing the unity committees to continue working with the corresponding committees of the Canadian Reformed Churches.

The Proposed Joint Church Order will be going to the churches of the federation for their review.

Synod affirmed the Theological Education Committee’s position that a federationally-controlled seminary is not biblically mandated, and encouraged it to continue its work with the Canadian Reformed Committee in order to draft “proposals for theological education to our respective synods in preparation for an eventual plan of union.”

Synod additionally voted to re-extend an invitation for unification to the small Orthodox Christian Reformed Churches.

The pace of the game may have slowed, but the ball remains in play.