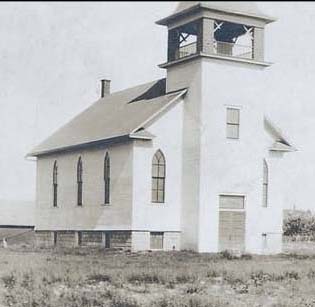 As Walker United Reformed Church celebrated its 100th anniversary, its members remembered the past while looking to the future with thankfulness to God.

The theme verse chosen for the occasion was Psalm 145:4, “One generation shall praise Thy works to another, And shall declare Thy mighty acts” (KJV).

A special centennial celebration took place on Sunday, December 8, 2013. Rev. Arthur Besteman, who assisted the church during two pulpit vacancies, led in congregational prayer. Walker’s current pastor, Rev. Corey Dykstra, preached from Deuteronomy 32:1-9 on “Our Faithful Covenant God.” He encouraged the congregation “to remember the life God gives us through His word by the Spirit, and the love He has particularly shown us in Christ. This was the foundation for the church for the last 100 years and is that which we need to continue to hold fast to.”

Following the service, attendees viewed a centennial display featuring church directories, photos of the church and members, the baptism bowl from the original building, commemorative dishes, a wooden Sunday school chair, and minute books from the Ladies Aid and Young People’s societies. Visitors also viewed a newly-commissioned painting of the original building.

Lunch was followed by the centennial celebration service at 1:30. Rev. Dykstra opened the service. Rev. David Klumpenhower led in prayer and thanksgiving; he then read from Psalm 145 and spoke briefly on its meaning. Rev. Joel Vander Kooi read Belgic Confession Art. 21 and Isaiah 52:1-15 as the basis of his sermon, in which he urged hearers to “Wake Up and Behold the Beauty of the Savior.”

Organizer Ben Veldkamp explains, “We are actually celebrating our centennial one year late—the church was officially organized on December 18, 1912.” He adds, “Our current minister, Corey Dykstra, was hung up in immigration limbo for over two years, and we wanted him to be with us for the celebration.”

Rev. Dykstra was ordained and installed on February 15, 2013.

In September, the congregation dedicated a centennial rock that was placed in front of the church. “Underneath the rock is buried a cylinder with pennies from the birth years of the members of the congregation,” explains Mr. Veldkamp, “or at least most of them—finding pennies from the 1910s and 1920s was difficult.” The theme verse from Psalm 145 is engraved on the rock.

The church is Walker’s oldest church and the only one to bear the city’s name. The current building stands on the original property, just north of where the first structure stood. The initial building’s construction began in 1911, but the church was not officially organized as a Christian Reformed Church until late in 1912.

The first man to serve the congregation was a home missionary, Rev. John R. Brink, who visited Walker on weekends from 1913-1916 to teach catechism and preach. Next was Rev. Peter J. Hoekenga (1917-1918) who served 18 months before resigning due to poor health. Rev. J. Wyngarden (1918-1928) was a veteran minister who provided stability for the young, growing congregation.

Rev. Peter Vos (1928-1947) took several voluntary pay cuts and frequently deferred his pay check to help the church meet pressing financial obligations during the difficult Depression years. The congregation grew numerically during that time, which led to a building addition in 1941.

Mr. Veldkamp said that explosive post-war growth in the Walker area in the late 1940s and early 1950s created the need for a subsequent addition, and changed the geographic dynamics from rural to suburban. But burgeoning membership soon stretched the existing building to its limits, and in 1960 construction began on a new building, dedicated in 1961.

“The original building was demolished, although some of its wood was re-used to build houses in the surrounding neighborhood,” says Mr. Veldkamp. “The old church’s bell was placed in the bell tower of the current church, and the cornerstone was embedded in one of the stairwells of the current building.”

Walker’s highest membership was 516 in 1966. Statistics remained in the upper 400s until denominational controversies took their toll.

“From 1985 to 1995,” says Mr. Veldkamp, “the church lost more than one quarter of her members…. Some members found Walker to be too conservative; others were upset that the church remained in the CRC.”

In September of 1997, 73% of the congregation voted to leave the CRC and affiliate with the newly-formed URCNA.

The above article by Glenda Mathes appeared on pages 14 & 15 of the January 1, 2014, issue of Christian Renewal.