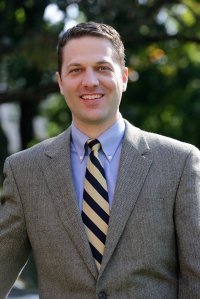 The Board of Trustees of Mid-America Reformed Seminary announced in October the appointment of Marcus A. Mininger as an instructor in New Testament Studies. Mr. Mininger will begin teaching at the Seminary for the spring term of 2011.

The Board has been seeking potential new faculty members since Dr. Nelson D. Kloosterman, Professor of Ethics and New Testament Studies, decided early this year to pursue other avenues of ministry after December 31, 2010.

“Marcus is an outstanding addition to our faculty,” says Dr. Cornelis P. Venema, President of Mid-America, “with great academic ability and a fine pastoral heart. I am delighted that he has accepted the appointment.”

A longtime member of the Orthodox Presbyterian Church (OPC) and a son of one of its ministers, Mr. Mininger is a licentiate in the Presbytery of Philadelphia of the OPC. He and his wife Chandra have three children: Hans (9), Anastasia (7), and Malena (1). The family hopes to move to the Dyer area in January of 2011.

“What probably excites me most about Mid-America is how consistently it brings principle and practice together in a distinctively Reformed seminary,” says Mr. Mininger. “Mid-America has a simple, powerful vision for cultivating ministers of the Word for the church, and its curriculum and institutional life are also carefully designed around that. This is such an encouragement to me and resonates with my own calling to the gospel ministry. It is a particular joy, then, to become part of this work. It is also a special privilege to focus on biblical studies, so that students will learn to mine the depths of the Word and proclaim its riches, to the glory of God.”

The decision to appoint Marcus initially as an instructor accords with Board policy, which includes pastoral experience as a necessary pre-condition for an initial appointment at the higher level of an assistant professor or associate professor.

“Though Marcus does not have extensive pastoral experience, as is desirable, he does have a clear grasp of the relation of seminary education to the church and the pastoral ministry,” says Dr. Venema. “He also has served in a variety of pastoral settings. The Lord willing, Marcus hopes to be ordained within the Presbytery of the Midwest of the OPC, and has agreed with the Board of Trustees’ encouragement that he seek out further opportunities for pastoral service in the local church. The Faculty Development Committee and the Board of Trustees deliberated carefully the question of Marcus’ relative lack of pastoral experience, but were convinced that his view of seminary education at Mid-America, his intention to be ordained within the OPC, and his evident gifts, academically and pastorally, warranted the decision to appoint him as an instructor.”