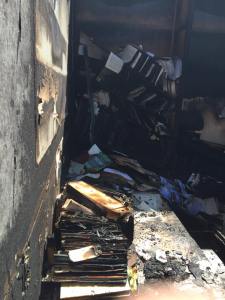 A massive fire destroyed much of the Faith United Reformed Church building in West Olive, MI, on May 13. No one was inside at the time, and Pastor Matthew Nuiver was one of the first to notice smoke as he drove up that morning.

“Initially I thought maybe it was a brush fire,” he said, “but as I got closer I saw the smoke appeared to be coming from the steeple.” He immediately called 911.

The fire moved quickly, engulfing the sanctuary and collapsing its roof within 40 minutes of the initial call. Smoke from the fire could be seen almost ten miles away. More than a dozen fire crews responded to the scene, and tanker trucks from surrounding townships provided water to ladder units. A fire wall between wings helped firefighters keep the inferno from spreading through the entire building, although the part still standing sustained some damage, primarily from smoke and water. The sanctuary section of the structure was completely destroyed.

News crews were quick on the scene, and Pastor Nuiver had the opportunity to testify on television networks about God’s faithfulness in the midst of loss.

“Certainly it’s gutting, and we’re disappointed,” he said, “but these are things that God can provide for us again and replace. We’re thankful no one was hurt. And we know that God is always faithful, so we’re trusting him.”

He also emphasized that the church is more than a building, even though it holds many emotional associations from weddings, baptisms, and funerals. “Those connections are all there, and they’re very important. So we don’t want to minimize that, but at the same time, the church is the people. And we’re thankful for the ways we’re going to be able to rally around each other.”

Several members of the congregation, who gathered to watch the fire, comforted each other and also witnessed to reporters. Marc Jaarsma reflected on the baptisms of his four children within the building. “Those memories can’t burn. Those milestones, and those special occasions,” he said. He expressed his confidence that the congregation would get through this. “Obviously our faith and trust in the Good Lord is going to be primary in that task.”

Elder Arlan Rouwhorst, identified as the church custodian, said, “I know the people in this church, and it’s a bump in the road. God has so faithful to this congregation and will continue to be. I know that beyond a doubt.”

The cause of the fire was being investigated, but media reports indicated that it did not appear suspicious.

Offers for worship facilities and assistance flooded in following the fire. Pastor Nuiver said, “It’s just overwhelming how people have offered use of space and other assistance.”

“It was seamless as far as sharing the worship space,” Pastor Nuiver explained, “although the media people outside did make it a little bit of a circus.”

Tad Groenendyk, a member of Faith URC and seminarian at Mid-America Reformed Seminary, had been scheduled to preach on May 15, and the elders asked him to go ahead as scheduled. His morning sermon was “Rejoice in the Lord!” and was based on Philippians 4:4-9. Although there was some discussion regarding the appropriateness of the text, Pastor Nuiver encouraged him to preach on it, saying, “This is the very time we need to hear these words.” The evening sermon was “The Lord Conquers a Heart,” based on Joshua 2.

Pastor Nuiver commented online later that day, “Thankful for the power of the gospel and prayer and the way that He builds His people together to be a place of His dwelling.”

Dealing with the fire’s aftermath and the insurance process seems overwhelming. The section of the building still standing consists of a gymnasium/fellowship hall, kitchen, bathrooms, and several classrooms. The destroyed part contained the sanctuary, some classrooms, bathrooms, nursery, church library, and secretary’s office. It also included Pastor Nuiver’s study with his library of books.

He has received offers to donate replacements, but is still trying to determine what he had and what he needs. The congregation plans to continue sharing worship space with South Olive CRC at least through May, but the Council has yet to decide on a course of action for the longer term.

“There are lots of questions we still have to ask as far as going forward,” Pastor Nuiver said. Some of those include if the existing wing can be restored adequately and if it provides sufficient space for 300 people to worship, classes to meet, and a nursery to be provided.

Pastor Nuiver admits the difficulty of trying to figure out the new normal while dealing with the losses. “This definitely changes the narrative for our church in some ways, but I’m not convinced that’s a bad thing.”

A couple of items pulled from the rubble and shown on television news demonstrate both loss and hope. A charred Bible, its cover burned off and pages singed, originally belonged to Pastor Nuiver’s great-grandfather. An encased shovel, donated by Pauline Dyke and her late husband Harris, was used to break ground for the building nearly 20 years ago.

“He saved it for us. That means we’ve got to do it over,” Pauline told reporters, smiling through her tears. She later added, “We know the Lord is good and He has a purpose for it all.”