What do you know about Jersey City? It’s the second most heavily-populated city in New Jersey with an ethnic diversity befitting it as the home of Ellis Island. It’s also the location of a young URCNA church plant, Grace Reformed Church.

When the work began meeting for worship on September 1, 2013, a core group of 24 people met at a local community college. Three baptisms, six professions of faith, and nearly three years later, the group has increased to about 40 persons (including some seeking membership), who now meet in a larger and more convenient space. 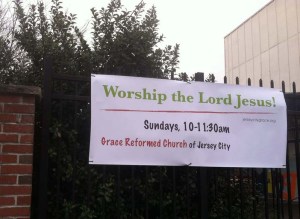 “Since March 2014,” explains Rev. Sam Perez, “we have been meeting in an after-school facility (New City Kids, a Christian non-profit associated with the Christian Reformed Church). This facility can accommodate 150-200 people, and allows us many freedoms that we didn’t have at the community college. For example, we can post a church sign on the front gate, we can have a monthly fellowship potluck, and there’s a place for crying babies and their mothers.”

Over the last three years, Grace Reformed Church has undertaken several outreach initiatives. Members have visited 500 apartments or homes in the immediate vicinity. They caroled in the neighborhood during the Christmas season. The group has hosted five community barbeques. They organized a basketball team of 19 high school boys who did not attend church, an effort they hope to repeat this coming year. The church’s website (jerseycitygrace.org) features video and audio files that are doctrinal and evangelistic. And they keep considering new avenues of outreach.

“We are looking to expand our opportunities by partnering with a local Gospel Rescue Mission,” says Rev. Perez, “and by hosting different URC groups who would be interested in short-term mission trips to Jersey City.”

In addition to staying closely aligned with its supervising church, the mission work has fostered fellowship with similar congregations by participating in three joint picnics with other NAPARC churches.

Rev. Perez reports that Grace Church has conducted three membership classes and sponsored a variety of studies. The group has covered J.I. Packer’s 18 Words and Gene Edward Veith’s God at Work. Now members are reaching out within their personal spheres.

“We’ve started regional groups where men lead different groups in their homes in the North Jersey area,” he says. “We are currently reading/studying Total Church: A Radical Reshaping Around Gospel and Community. The Jersey City regional group meets at a local diner.”

Primary study opportunities occur on Sundays under the proclamation of the Word. After preaching through Mark 11, Rev. Perez is leading a short series on “kingdom/frontline” prayer before beginning the third summer of instruction in the Psalms. “We’re covering Psalms 21-30 this year,” he says. “The 150 sermon-series will take 15 years at this rate.”

Initiating a second service in January of 2015 allowed time to preach on the Heidelberg Catechism, which will conclude in early June. In January of 2016, the group began a monthly prayer service on the first Sunday of each month. Sunday services are held at 10:00 AM and noon in a building at 240 Fairmount Ave., at the intersection with Monticello Ave. in Jersey City. 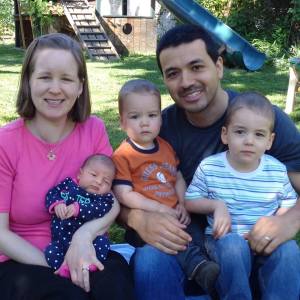 Rev. Perez is also finding many areas for personal service. “I’m an ad hoc volunteer at First Choice, a Christian crisis pregnancy network. I teach English once a week at Open Doors, a Christian non-profit that seeks to help immigrant populations in the NJ-NY area. I have been invited to teach once a week, at New City Kids, a class of teenagers the material from Veith’s book on vocation.”

As he reflects on the short history of the Jersey City church plant, Rev. Perez recognizes that although the work is “often tiring, disappointing, and frustrating, our hope is not in horses nor chariots, nor in having ‘things go smoothly,’ nor in our ability to overcome obstacles. Our hope is in the name of the Lord, who made heaven and earth. God has been ever faithful, His Word ever true, and His promises ever sweet.”

He adds, “As we never tire of saying at Grace Reformed, the Lord is the One, True, Living God. Who is like the Lord, our God? We know that Christ is the King of all kings, and that He has been given possession of all the nations. So we seek to be faithful to Him, and fruitful because of His mercies blessing His work.”

Want to know more about Jersey City and Grace Reformed Church? Maybe you should consider a short-term mission trip to come alongside the saints there as they seek to do God’s work in reaching the nations with the good news of Jesus Christ.