A Reformation conference hosted by Bethel URC in Calgary, AB, on October 28-29, 2011, explored intriguing topics under the theme: “Reformation Then and Now: Ingredients for Reformation Today.” 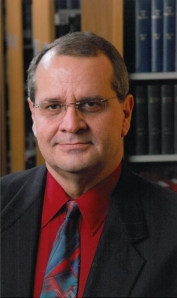 Dr. J. Mark Beach, Professor of Ministerial and Doctrinal Studies at Mid-America Reformed Seminary, spoke about the need for modern believers to overcome tendencies toward works religion and distortions of grace.

His Friday evening lecture, “Learning the Way of Grace (Not Works),” began by showing that the Protestant Reformation was primarily about salvation by grace alone.

“It is easy, however,” said Dr. Beach, “to unlearn this truth in the rough-and-tumble of life, to fall into a ‘works religion’ without realizing it, and to suffer under the oppression of our own human-fashioned Christianity.”

By examining the biblical characters of Naaman (2 Kings 5) and the rich young ruler (Mark 10), Dr. Beach explored how to relearn the way of grace.

“By relearning salvation by grace alone,” he said, “the church is on its way to reformation afresh.”

Dr. Beach addressed the first distortion of divine grace by looking at the book of Jonah, demonstrating how to recognize and overcome loveless Christianity.

“Grace that is reluctant grace is no grace at all,” he said. “We must recapture that blessedness of God’s loving grace that seeks us out and finds us so that we love as He does, and so that we celebrate the gospel that keeps us, carries us, and brings us home. In overcoming distortions of grace, we shall experience the reformation of the church in our own time.”

Dr. Beach demonstrated that the second distortion of divine grace, “Elder Brother Christianity,” corrupts the gospel and undermines the church’s witness to the world.

Using the Parable of the Prodigal Son from Luke 15, Dr. Beach unmasked the ways in which the modern church falls into a twisted version of Christianity that is judgmental, unkind, denunciatory, and ungracious to the lost.

“This attitude bespeaks our own lost state, should we succumb to it,” he said. In order for the church to be re-formed in our time, it is vital that we hold before us the “love of God in Christ Jesus that welcomes sinners home and joins the celebration, with the angels in heaven, over the healing of the lost.”

About 75 people attended the conference. The Calgary Protestant Male Choir and an organ/trumpet musical intermezzo contributed to Friday evening’s celebration. Inheritance Publications offered a selection of Reformed books and music during the conference.

Dr. Beach continued with the Reformation Day theme as he preached at Bethel URC on Sunday, October 30.

Following the evening service, one woman told Dr. Beach that his addresses and sermons were like “a giant hug from God.”

The above article by Glenda Mathes appeared on pages 30-31 of the December 28, 2011, issue of Christian Renewal.