David wrote Psalm 3 when he fled from his son, Absalom. That chaotic scene appears in 2 Samuel 15:13-16:14, but the roots of this complex narrative go back to Ammon’s rape of Tamar in 2 Samuel 13 and even further back to David’s sins that begin in 2 Samuel 11. Much could be written about not only David’s sexual sin his murderous manipulations, but also his failures as a father and a king. 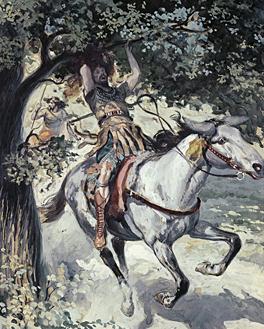 If you read the whole story through 2 Samuel 19, you’ll see that despite Absalom’s cunning deceit and sickening revolt (that included gross sexual sin), David loved him and mourned his death (who was killed after he was dismounted when his long and beautiful hair caught on a tree branch). That attitude seems difficult to reconcile with David’s words in Psalm 3, written while on the run from that same son.

O LORD, how many are my foes!
Many are rising against me;
many are saying of my soul,
there is no salvation for him in God.
Selah

David focuses not on the one son who has conspired against him and turned the people’s hearts away, but on the many men who have taken up arms to fight him and on those who no longer view David as God’s chosen leader. These rebellious people, in fact, no longer believe that he is one of God’s chosen people. They think David is destined for eternal as well as temporal destruction.

The word “Selah” in the psalter has long been a subject of debate and uncertain definition. Some scholars believe it merely indicates some type of musical notation. Others believe it was meant to be spoken, like the word “Amen” that appears in a few psalms. However the word was  used in ancient worship, it seems to indicate something similar to “Pause and consider.”

Although David feels surrounded by enemy hordes, he trusts in God (3-4, ESV):

But you, O LORD, are a shield about me,
my glory, and the lifter of my head.
I cried aloud to the LORD,
and he answered me from his holy hill.
Selah

God is David’s shield, his glory, and the lifter of his head. David has seen God’s deliverance so many times in the past that he assumes deliverance now as if it has already been accomplished. Pause and consider that!

I lay down and slept;
I woke again, for the LORD sustained me.
I will not be afraid of many thousands of people
who have set themselves against me all around.

Even though “many thousands” who have set themselves against David surround him, he is not afraid. God sustains him.

David depends not on his own strength or that of his meager army, but on the Lord alone. God is the one to whom he turns (7, ESV):

Arise, O LORD!
Save me, O my God!
For you strike all my enemies on the cheek;
you break the teeth of the wicked.

What vivid and violent language! God strikes the enemies’ cheeks and breaks their teeth. This initially seems to contrast sharply with Christ’s words in Matthew 5:39, “But I say to you, Do not resist the one who is evil. But if anyone slaps you on the right cheek, turn to him the other also.” Note, however, that Christ speaks about our response to evil, while David talks about God’s response. David isn’t even asking God to do this; he’s simply stating that this is what God does.

While speaking at a recent conference, Dr. W. Robert Godfrey told how he and his wife once wondered about their then three-year-old daughter’s reaction to this verse of Psalm 3. When Dr. Godfrey asked the little girl what she thought, she replied, “Well, they’re God’s enemies and he’s God, isn’t he?”

While thousands of Israelite rebels questioned David’s reign and even his salvation, he concludes this psalm by affirming his belief in God’s saving grace and providential care (8, ESV):

Salvation belongs to the LORD;
your blessing be on your people!
Selah

Pause and consider that God destroys his enemies, but blesses his people. May the Holy Spirit fill your heart today with conviction of God’s personal salvation and his corporate care!